Recognizing that healthcare organizations are facing constant cyber attacks, the 2018 Impact of Cyber Insecurity on Healthcare Organizations study examines the myriad of cybersecurity-related challenges and how organizations are (or are not) addressing them. Results show the security stakes are high, with 62 percent of the 627 executives surveyed admitting to experiencing an attack in the past 12 months, and more than half losing patient data as a result. 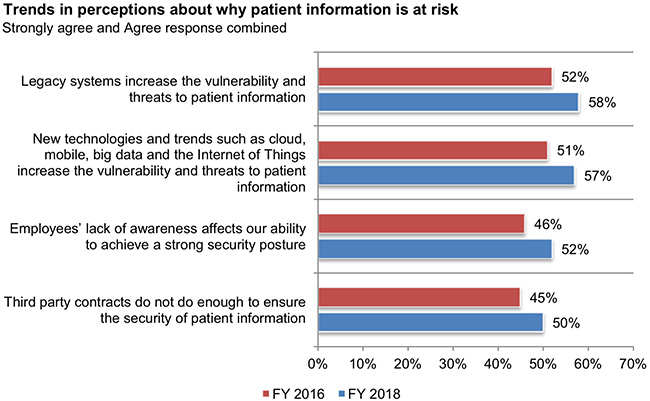 According to publicly available data, breaches in the last year hit a new all-time high. Of five industries tracked, the Medical/Healthcare industry last year accounted for more than 23 percent of total breaches in 2017, resulting in the exposure of more than five million patient records. Only the business sector saw more successful attacks, with HCOs following second for the fourth year running.

Who is attacking? What do they want? How are they doing it?

Notably, organizations surveyed are equally concerned with external attacks (63 percent) as they are with employee negligence or malicious insiders (64 percent). And what are the bad guys after? When asked, respondents highlighted these top five items:

Hackers eager to cause chaos, steal or hold data for ransom subject healthcare organizations to all variety of attacks. Among these, the exploitation of existing software vulnerabilities greater than three months old is most common at 71 percent, followed closely by Web-borne malware attacks at 69 percent.

While the report finds many traditional attack types being used, the rise of ransomware – at 37 percent – should raise alarm as a new and lucrative attack vector. Hackers are successfully earning significant income from holding systems and data hostage. 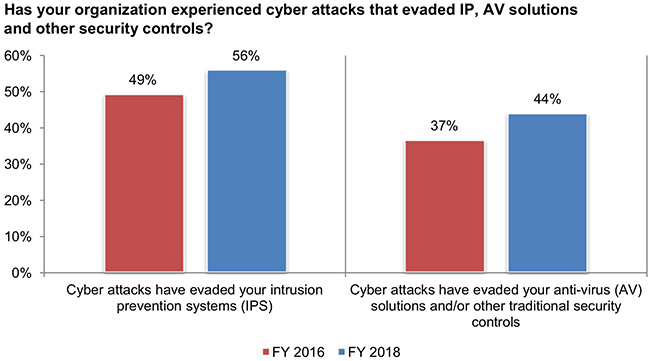 Fifty-two percent of those surveyed agreed that a lack of employee awareness and training affects their ability to achieve effective security. In addition, 74 percent cited insufficient staffing as the biggest obstacle to maintaining a fully effective security posture. According to responses, only 51 percent of organizations have a dedicated CISO and 60 percent surveyed don’t think they have the right cybersecurity qualifications in-house.

On top of the lack of education, training and resources, only half of organizations (51 percent) have any type of incident response program at all. This means half of all organizations have no process or remediation plan in place to respond to, mitigate, or prevent attacks from happening again and causing extensive damage. And with respondents noting that the average compromise costs roughly four million dollars – increasing investment in and attention to education, resources and procedures appears long overdue.

“In an increasingly connected, digitally centric world, hackers have more opportunities and incentive than ever to target healthcare data, and the problem will only increase in scope over time,” said Merlin International’s Director of Healthcare Strategy, Brian Wells. “Healthcare organizations must become even more serious about cybersecurity to protect themselves and their patients from losing access to or control of the proprietary and personal information and systems the industry depends on to provide essential care.”