Many organizations are still struggling to master basic firewall hygiene, promising increased complexity and risk associated with network security policy management for those planning to adopt hybrid cloud models and next-gen architectures, according to Firemon’s 2018 State of the Firewall report. 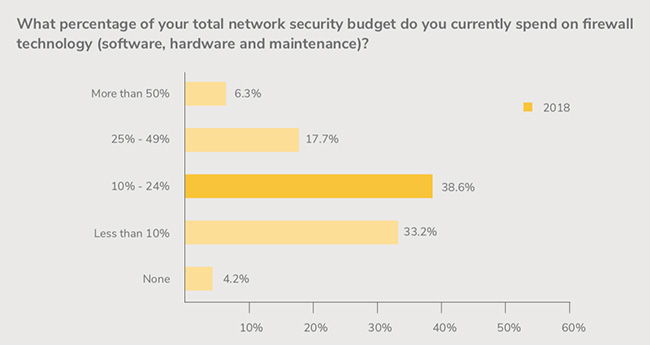 The majority of respondents believe the firewall is still an important part of their overall security architecture, with 94% saying firewalls are as critical as always or more critical than ever. The same percentage of survey takers believe the firewall will be just as critical or more critical to their overall security architecture over the next five years. And companies are backing up their beliefs with budget dollars: Nearly one fourth (24%) allocate more than 25% of their total network security budget to firewall technology (hardware, software, maintenance), while 39% devote between 10 and 24%.

“Many companies are still trying to manage firewall rules manually, but in this era of next-gen architectures and sophisticated malware, this is no longer an effective way to enforce access policies and mitigate risk,” said FireMon CEO Satin Mirchandani. “With more than half of survey respondents stating that three or more teams are involved in change management, the high number of change requests alone can drain valuable time, resources and budget from any security program. Factor in new technology adoption, and the stage is set for further policy management problems.”

Though survey respondents believe firewalls will be a fundamental component of security infrastructures over the next five years, the role of firewalls in next-gen architectures is unclear to many business, IT and security professionals. 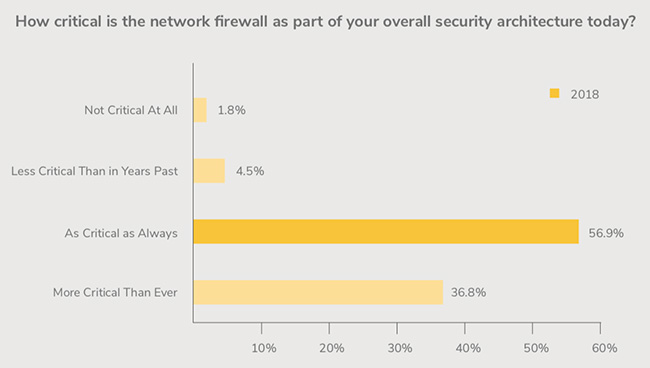 “Firewalls will not become obsolete with next-gen architectures, but the old way of writing firewall rules will,” continued Mirchandani. “The erosion of a defined corporate perimeter has simultaneously increased the number of assets organizations are trying to protect as well as the number of firewall rules. The only way to enforce consistent access policies across the enterprise is to implement automated, intent-based security. By decoupling security intent from implementation, organizations can ensure continuous compliance with enterprise security intent, even when the network evolves.”