The increased complexity of the IT environment, combined with increasingly sophisticated attacks and a rapidly evolving threat landscape, is causing organizations to invest more money in cybersecurity and start to focus on the impact of cyber threats and cybersecurity from a business perspective, according to a research report conducted by Enterprise Strategy Group (ESG). 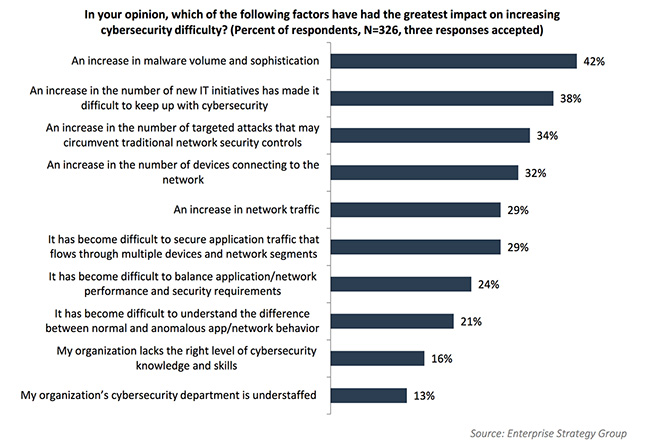 One of the report’s key findings is that in many organizations (96 percent), the traditional role of the CISO has expanded. As security concerns are integrated into the planning for new digital initiatives, CISOs are more often included as active participants in enterprise business discussions. By including CISOs from the beginning, enterprises can proactively balance security and performance with operational functions such as ease of access, reliability, and a positive user experience.

The primary driver cited for the elevation of the CISO is the increasing difficulty of protecting enterprise data. Nearly 80 percent of the 413 enterprise security professionals surveyed cited the expanded volume and sophistication of malware as the main reason it is becoming is harder to protect vital information.

According to the report, multiple security researchers indicate that 80–90 percent of malware attacks target a single device and 50–60 percent of malicious web domains are active for one hour or less. These trends speak to the rise of targeted attacks designed to penetrate the network of a single organization. Targeted attacks act as small needles in a large haystack, making cybersecurity practices increasingly difficult.

The second most frequently cited reason for the increase in cybersecurity difficulty is the increase in the number of company IT initiatives. Digital business projects, cloud and third-party infrastructure, and the IoT make security substantially more challenging. The report states, “Security teams find it difficult to learn the nuances of these technology initiatives, understand the associated risks, and implement the right security safeguards to protect their organizations.” Inserting security executives directly into the business conversation enables them to promote advances in digital business while balancing associated risk.

CISOs who are given responsibility for both business and security can address security from the very beginning of a project. A total of 86 percent of respondents agreed that applying cybersecurity to initial project planning and development can help decrease the likelihood of a security breach. Testing for both security and performance should be ongoing, from the early stages of the project through live operation.

According to the report, “To ensure strong security, many InfoSec pros believe this testing should be done on a continuous rather than periodic basis.” In addition, 79 percent of those surveyed agreed that organizations should test the effectiveness of security controls more frequently. 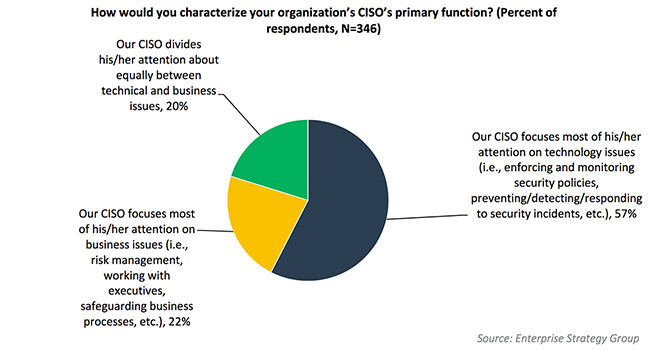 “Security must be a proactive measure within the enterprise,” said John Weinschenk, general manager, Enterprise Network and Application security at Spirent Communications. “To meet the demands of business and the realities of threats and risk, security professionals must be actively involved with the business and integrate security considerations from the very beginning of a project.”

“Moving security leadership into business planning is rapidly becoming both a necessity and a reality,” said Jon Oltsik, senior principal analyst, ESG Research. “Enterprises must balance business considerations with security consciousness to be enablers of growth while keeping risk in check.”

Another encouraging fact from the research is that 92 percent of the organizations surveyed were planning to increase their cybersecurity budgets through 2018. The areas in which organizations were most likely to increase spending included network security, cloud security, and application security. Some of the planned increase stemmed from unifying business and security functions and the desire to treat security as an integral part of the development process, increasing the need for earlier and more frequent security testing.

In addition, the new data shows that too many organizations have an inadequate level of security staff and are particularly lacking staff with combined experience in networking and security. CISOs can help bridge these skill gaps.