Newly released data from Akamai’s 2019 State of the Internet / Security Financial Services Attack Economy Report has found that 50% of all unique organizations impacted by observed phishing domains were from the financial services sector.

The data shows that, in addition to unique phishing attempts, adversaries also leveraged credential stuffing attacks to the tune of 3.5 billion attempts during an 18-month period, putting the personal data and banking information of financial services customers at risk.

The report indicates that between December 2, 2018 and May 4, 2019, nearly 200,000 phishing domains were discovered, and of those domains, 66% targeted consumers directly. When taking the phishing domains targeting consumers only into consideration, 50% of those targeted companies in the financial services industry.

“We’ve seen a steady rise in credential stuffing attacks over the past year, fed in part by a growth in phishing attacks against consumers,” said Martin McKeay, Security Researcher at Akamai.

“Criminals supplement existing stolen credential data through phishing, and then one way they make money is by hijacking accounts or reselling the lists they create. We’re seeing a whole economy developing to target financial services organizations and their consumers.”

Opening of accounts with stolen identities

Once criminals have succeeded in their schemes, they need to process their ill-gotten data and funds. As Akamai’s report highlights, one method of dealing with this situation centers on ‘bank drops’ – packages of data that can be used to fraudulently open accounts at a given financial institution.

Bank drops will typically include a person’s stolen identity – often called ‘fullz’ by criminals online, including name, address, date of birth, Social Security details, driver’s license information, and credit score. Secure access to the fraudulent accounts comes via remote desktop servers, which are matched to the geographic location of the bank and the ‘fullz’.

Financial institutions continue to investigate the ways in which criminals are opening these drop accounts, and are working diligently to stay ahead of the curve. What most businesses don’t realize, however, is that criminals are recycling old attack methods.

Akamai’s findings revealed that 94% of observed attacks against the financial services sector came from one of four methods: SQL Injection (SQLi), Local File Inclusion (LFI), Cross-Site Scripting (XSS), and OGNL Java Injection (which accounted for more than 8 million attempts during this reporting period). OGNL Java Injection, made famous due to the Apache Struts vulnerability, continues to be used by attackers years after patches have been issued. 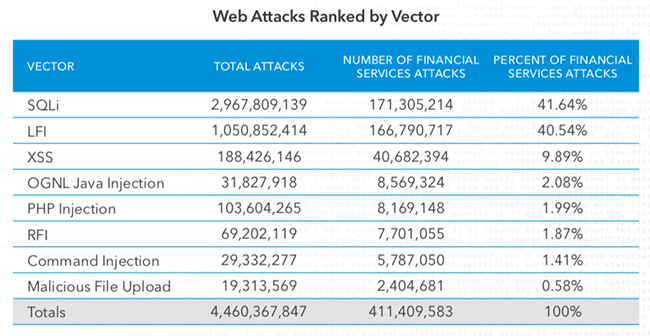 “Attackers are targeting financial services organizations at their weak points: the consumer, web applications and availability, because that’s what works,” said McKeay.

A recent (March 2019) spate of DDoS attacks against several financial services organizations used TCP SYN-ACK packets to flood their data centers. They had limited impact on those, but it seems that the attackers’ secondary goal was to damage their online reputations.

“The original SYN packet used to cause the reflector to send a SYN-ACK was seen by the reflector as a SYN flood attack and caused the reflector to tag the spoofed IP address as a malicious actor. This created a secondary effect of blacklisting financial services IP addresses, and creating further issues for defenders,” Akamai explained.

“One theory suggests the effort was to hurt the reputation of the tools, and the tool makers, by maliciously causing financial services organizations to be falsely identified as bad actors. The Spamhaus Project was especially affected, as angry security teams called to understand why they had suddenly been listed as malicious.”