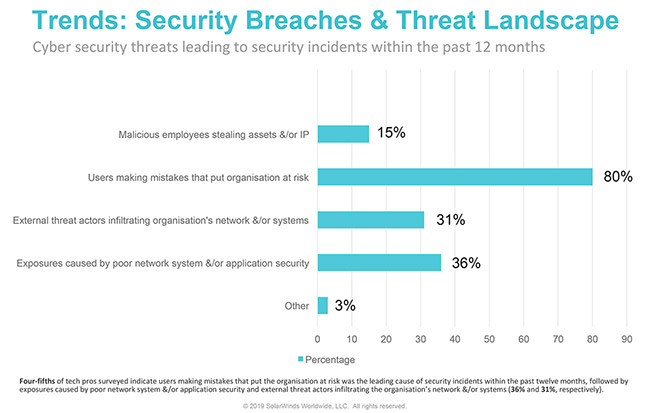 Password management issues, accidental exposure, deletion, corruption or modification of critical data (40%), and copying data to unsecured devices (36%) were the other leading causes reported that lead to insider mistakes.

The survey results also found that 89% of tech pros surveyed indicated they feel unequipped to successfully implement and manage cybersecurity tasks today with their current IT skillset.

Types of cybersecurity threats leading to security incidents within the past 12 months:

The following cybersecurity threats could lead to security incidents in the next 12 months:

IT skillsets and landscape: Not sufficiently equipped

The findings are based on a survey fielded in August/September 2019, which yielded responses from 110 technology practitioners, managers, and directors in Germany from public- and private-sector small, mid-size and enterprise organizations.