The network is vital to today’s digital business. Whether maximizing employee productivity, optimizing customer experience or keeping data protected and secure, the network is foundational to business success.

At the same time, the network is in the midst of one of its biggest evolutions since the introduction of the Internet, creating an opportunity for IT leaders and their teams to innovate. Cisco asked over 2000 IT leaders and network strategists how they plan to prioritize investment and the current state of their networks.

“IT teams today are running complex mission critical networks that are increasingly capable of providing rich data. But using that data to improve the operations, security, or business impact of the network requires new tools. That’s why IT teams are embracing intent-based networking, AI and machine learning — because the business demands it,” said Scott Harrell, SVP and GM, Cisco Enterprise Networking.

IT leaders expect new wireless technologies, IoT and AI-enabled operations, threat detection and remediation to have the biggest impact on their network strategy and design over the next five years. 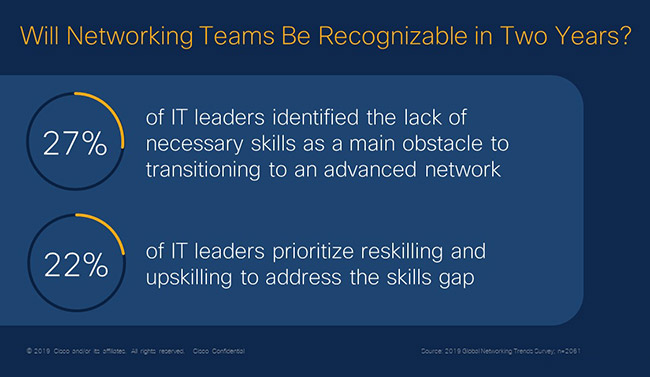 IT operations are struggling to move from reactive to proactive

IT leaders and strategists aren’t concerned about a skills gap