60% of initial entries into victims’ networks leveraged either previously stolen credentials or known software vulnerabilities, allowing attackers to rely less on deception to gain access, according to a new IBM report exploring the global threat landscape. 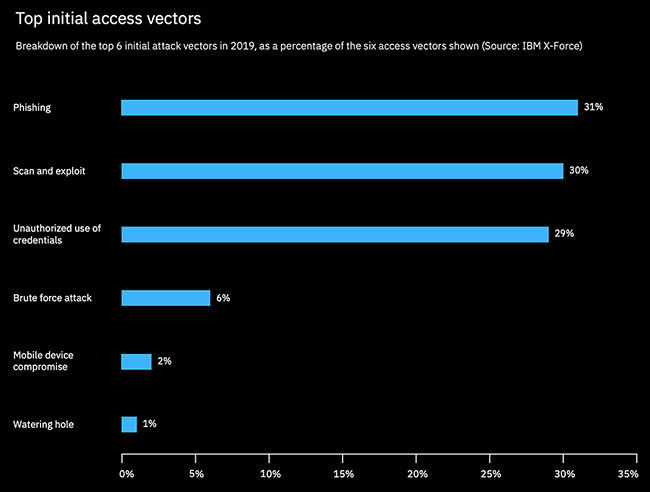 “The amount of exposed records that we’re seeing today means that cybercriminals are getting their hands on more keys to our homes and businesses. Attackers won’t need to invest time to devise sophisticated ways into a business; they can deploy their attacks simply by using known entities, such as logging in with stolen credentials,” said Wendi Whitmore, Vice President, IBM X-Force Threat Intelligence.

“Protection measures, such as multi-factor authentication and single sign-on, are important for the cyber resilience of organizations and the protection and privacy of user data.”

Of the more than 8.5 billion breached records reported in 2019, seven billion of those, or over 85%, were due to misconfigured cloud servers and other improperly configured systems — a stark departure from 2018 when these records made up less than half of total records.

Some of the most active banking trojans found in this year’s report, such as TrickBot, were increasingly observed to set the stage for full-on ransomware attacks. In fact, novel code used by banking trojans and ransomware topped the charts compared to other malware variants discussed in the report.

This shift could demonstrate the increasing trust put in technology providers over historically trusted retail and financial brands. Top brands used in squatting schemes include Google, YouTube and Apple.

The report revealed trends in ransomware attacks worldwide, targeting both the public and private sectors.

While over 100 U.S. government entities were impacted by ransomware attacks last year, there were also significant attacks against retail, manufacturing and transportation —which are known to either hold a surplus of monetizable data or rely on outdated technology and, thus, face the vulnerability sprawl.

In fact, in 80% of observed ransomware attempts, attackers were exploiting Windows Server Message Block vulnerabilities, the same tactic used to propagate WannaCry, an attack that crippled businesses across 150 countries in 2017.

With ransomware attacks costing organizations over $7.5 billion in 2019, adversaries are reaping the rewards and have no incentive to slow down in 2020. New malware code was observed in 45% of banking trojans and 36% of ransomware. This suggests that by creating new code attackers are continuing to invest in efforts to avoid detection.

Concurrently, a strong relationship between ransomware and banking trojans has been observed, with the latter being used to open the door for targeted, high-stakes ransomware attacks, diversifying how ransomware is being deployed.

For example, the most active financial malware according to the report, TrickBot, is suspected of deploying Ryuk on enterprise networks, while various other banking trojans, such as QakBot, GootKit and Dridex are also diversifying to ransomware variants.

Nearly 60% of the top 10 spoofed brands identified were Google and YouTube domains, while Apple (15%) and Amazon (12%) domains were also spoofed by attackers looking to steal users’ monetizable data. IBM X-Force assesses that these brands were targeted primarily due to the monetizable data they hold.

Facebook, Instagram and Netflix also made the list of top 10 spoofed brands observed but at a significantly lower use rate. This may be due to the fact that these services don’t typically hold directly monetizable data.

As attackers often bet on credential reuse to gain access to accounts with more lucrative payouts, frequent password reuse may be what potentially made these brands targets. In fact, 41% of millennials surveyed reuse the same password multiple times and Generation Z averages use of only five passwords, indicating a heavier reuse rate.

Discerning spoofed domains can be extremely difficult, which is exactly what attackers bet on. With nearly 10 billion accounts combined , the top 10 spoofed brands listed in the report offer attackers a wide target pool, increasing the likelihood that an unsuspecting user clicks an innocent-seeming link from a spoofed brand.

Retail has jumped to the second most attacked industry in this year’s report, in a very close race with financial services which remained at the top for the fourth year in a row. Magecart attacks are among the most prominent attacks observed against retail, impacting a reported 80 e-commerce sites in the summer of 2019.

Cybercriminals seem to have set their sights on consumers’ PII, payment card data and even valuable loyalty program information. Retailers also experienced a large amount of ransomware attacks based on insights from IBM’s incident response engagements. 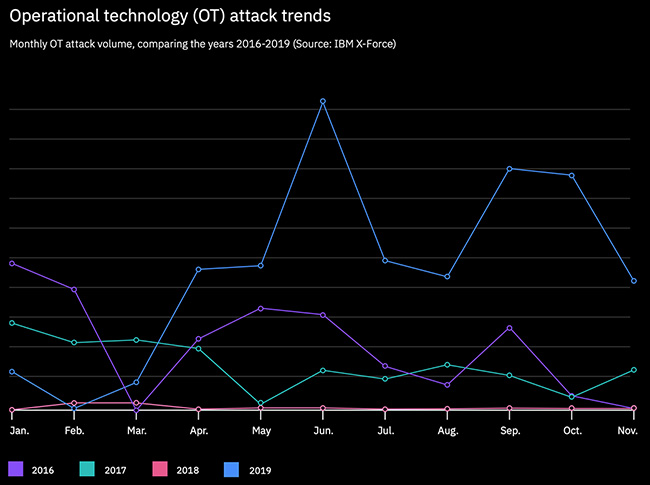 In 2019, OT targeting increased 2000% year over year with more attacks on ICS and OT infrastructure than any of the prior three years. Most observed attacks involved a combination of known vulnerabilities within SCADA and ICS hardware as well as password-spraying.

These regions experienced the highest number of observed attacks as well as suffered the largest reported data losses over the past year, over 5 billion and 2 billion records exposed respectively.