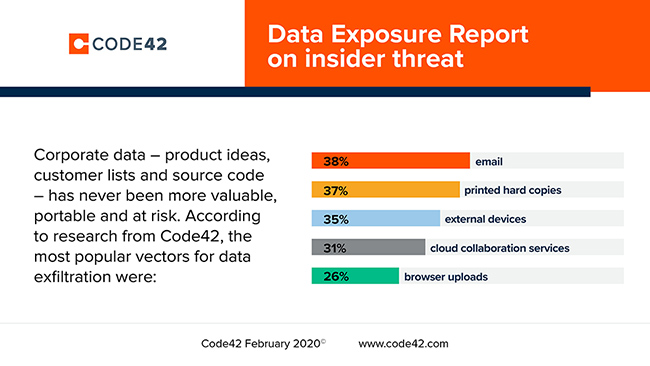 Nearly 5,000 knowledge workers at companies with more than 1,000 employees in the U.S., U.K. and Germany were surveyed.

“When it comes to data loss, leak and theft, for too many companies, the inside is their blindside,” said Joe Payne, Code42’s president and CEO. “Insider threat programs are not keeping up with today’s collaborative work culture. People and data are on the move now more than ever. Workers are switching jobs, and company files are being uploaded to the web, emailed as attachments and synched to personal cloud accounts.”

Cloud-based collaboration tools have changed the workplace. As part of their regular work routines, employees are emailing, airdropping, messaging and slacking from desktops, mobile devices, on the road and in coffee shops.

According to the report, workers routinely use both authorized and unauthorized cloud-based platforms to share files and ideas with colleagues. They sidestep sanctioned tools because they believe they are too complicated, restrictive and slow—or don’t have enough features.

While technology has made it easy for employees to share files legitimately via personal email and the cloud, it’s also made it easier for them to exfiltrate — or even infiltrate — data like product ideas, source code and customer lists.

The risk of insider threat incidents is heightened because the very tools that workers use to collaborate are some of the most popular vectors for data exfiltration.

The simple act of changing jobs can tempt employees to take company data — and workers are changing jobs more frequently than ever. Security teams continue to grapple with how to effectively deal with data theft and misuse — whether accidental or intentional — when employees depart.

As workers move from company to company, they admit that they have not only taken data with them, they have done it more than once. The consequences of this behavior are even more damaging to a business when workers take data from a former employer and go to work for a competitor.

According to the research, both former and new employers do little to stop data theft by transitioning employees. 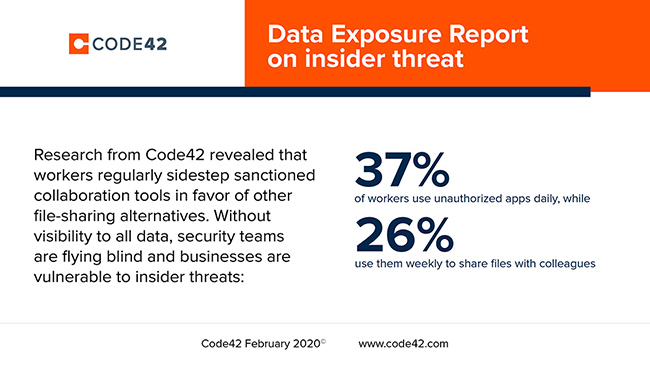 “Without the ability to detect and investigate file movement both inside and outside company walls, insider threat programs are leaving data more vulnerable and security teams flying blind,” said Jadee Hanson, CISO and VP of information systems for Code42.

“There’s a gap in the protection stack. Security teams need to reassess their solutions. This starts with an insider threat program that provides complete data visibility — from who has data access, to where data lives and moves.”