While enterprises rapidly transition to the public cloud, complexity is increasing, but visibility and team sizes are decreasing while security budgets remain flat to pose a significant obstacle to preventing data breaches, according to FireMon’s 2020 State of Hybrid Cloud Security Report. 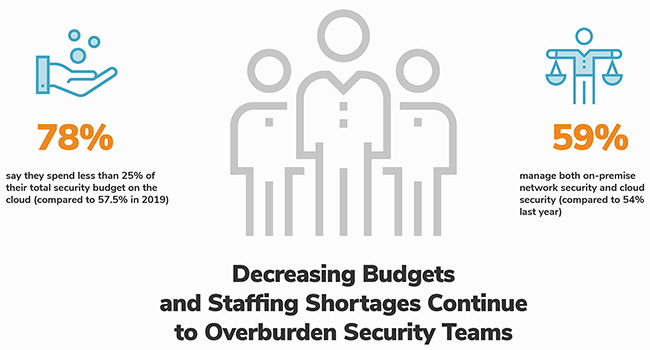 “As companies around the world undergo digital transformations and migrate to the cloud, they need better visibility to reduce network complexity and strengthen security postures,” said Tim Woods, VP of Technology Alliances for FireMon. “It is shocking to see the lack of automation being used across the cloud security landscape, especially in light of the escalating risk around misconfigurations as enterprises cut security resources. The new State of Hybrid Cloud Security Report shows that enterprises are most concerned about these challenges, and we know that adaptive and automated security tools would be a welcomed solution for their needs.”

While enterprises increasingly transition to public and hybrid cloud environments, their network complexity continues to grow and create security risks. Meanwhile, they are losing the visibility needed to protect their cloud systems, which was the biggest concern cited by 18 percent of C-suite respondents, who now also require more vendors and enforcement points for effective security.

The 2020 FireMon State of Hybrid Cloud Security Report found that:

Despite increasing cyberthreats and ongoing data breaches, respondents also reported a substantial reduction in their security budgets and teams from 2019. These shrinking resources are creating gaps in public cloud and hybrid infrastructure security.

While cloud misconfigurations due to human-introduced errors remain the top vulnerability for data breaches, an alarming 65.4 percent of respondents are still using manual processes to manage their hybrid cloud environments. Other key automation findings included:

Better third-party security tools integration needed: The lack of automation and integration across disparate tools is also making it harder for resource-strapped security teams to secure hybrid environments. As such, 24.5 percent of respondents said that not having a “centralised or global view of information from their security tools” was their biggest challenge to managing multiple network security tools across their hybrid cloud.

By harnessing automated network security tools, robust API structures and public cloud integrations, enterprise can gain real-time control across all environments to minimise challenges created by manual processes, increasing complexity and reduced visibility. Automation is also the antidote to shrinking security budgets and teams by enabling organisations to maximise resources and personnel for their most strategic uses.