As COVID-19 slowly spread across the globe, consumer demand for commercial virtual private network (VPN) services has soared – both for security reasons and for bypassing geo-blocking of (streaming) content. Not unexpectedly, enterprise VPN use has also greatly increased, and so has the use of the Remote Desktop Protocol (RDP), a popular and common means for remotely managing a computer over a network connection. 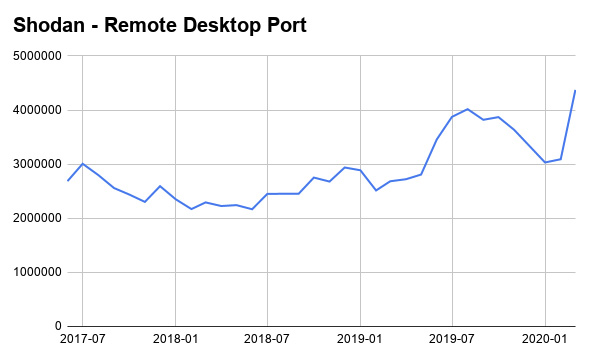 Increased enterprise RDP and VPN use

Shodan creator John Matherly has pulled old and new data regarding devices exposing RDP and VPN protocols and ports to the Internet and has confirmed that:

With the increased usage of these services comes an increase risk of compromise, though.

“[RDP] has a history of security issues and generally shouldn’t be publicly accessible without any other protections (ex. firewall whitelist, 2FA),” Matherly noted.

While helpful for allowing remote users to securely connect to corporate applications and resources, the VPNs set up by organizations are not immune to attack and compromise via known and unknown vulnerabilities, both on the client and server side.

Among the more recent examples are:

The latter two can be exploited remotely by sending a specially crafted HTTPS request, don’t require authentication, and allow attackers to download files/extract sensitive information from the vulnerable servers. They have also been actively exploited by attackers.