At a high level—and contrary to conventional wisdom – not all IT budgets are being cut. Even with the economic challenges that COVID-19 has posed for businesses, almost 38 percent of enterprises are keeping their IT budgets unchanged (flat) or actually increasing them.

Yellowbrick Data received responses from more than 1,000 enterprise IT managers and executives, uncovering their infrastructure priorities during this era of economic uncertainty and disruption.

“The survey brought to light some trends that we have been noticing recently related to the speed at which companies are moving to the cloud and investing in analytics. In fact, more than half of enterprises are accelerating their move to the cloud in light of COVID-19 challenges to their businesses,” said Jeff Spicer, CMO for Yellowbrick Data.

“But what really stands out is that nearly 55 percent of enterprises are looking at a hybrid cloud strategy with a combination of cloud and on-premises solutions. That clearly shows that a cloud-alone strategy is not what most enterprises are looking for—and validates what our customers are telling us about their own best practices combining cloud and on-prem approaches to their biggest data infrastructure challenges.”

For huge margins of enterprise IT leaders, investments in data infrastructure and analytics are a top priority:

Answering the “why” behind IT investments

These are the top four reasons IT decision-makers cite for investing in a new data warehouse or data analytics tool:

Many firms are modernizing by adding cloud services, with 55 percent of enterprises looking at a hybrid cloud strategy as their best approach.

Enterprises see a variety of benefits with hybrid cloud. Answers that gained a more than 50 percent response included: 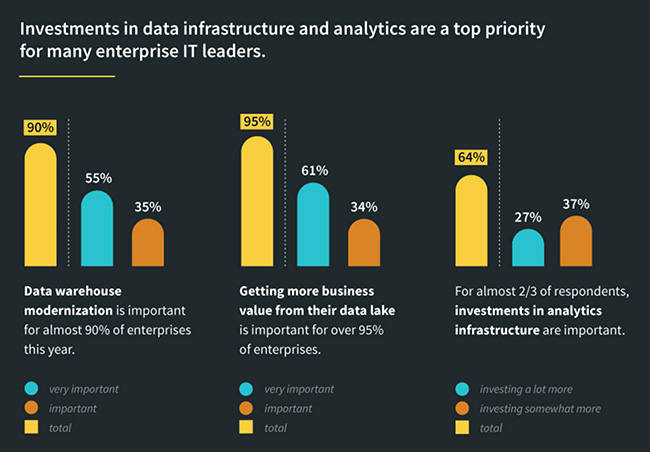 When asked to identify their #1 business priority (single choice only) from their cloud investment, decision-makers gave numerous responses, with two consensus points emerging:

Despite enterprises embracing the cloud, some skepticism remains. 27 percent of enterprise leaders say they do not trust public cloud providers to prioritize their business needs.

With the above statistic in mind, it is not surprising that risk mitigation remains a critical consideration, with 82 percent of respondents saying they want hybrid or multi-cloud options to spread any risk from their cloud investments, along with an additional 67 percent saying there are some parts of their business they will not trust to any single cloud vendor.