Business confidence in IT spending levels declined in the last week of May, according to IDC. 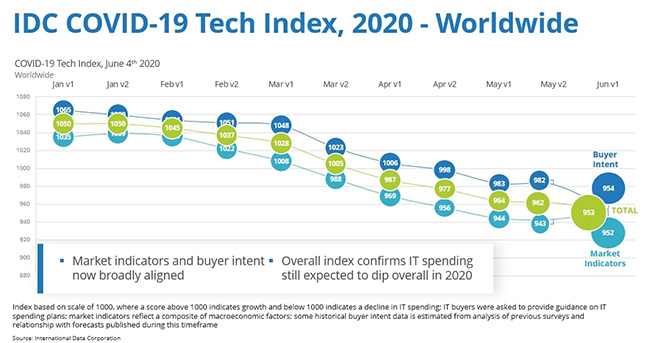 IT buyers in the US, Western Europe, and some parts of Asia/Pacific indicated that they now expect total IT spending to decline by more than previously anticipated. This is in spite of a general stabilization in other market indicators over the past month, as many countries prepare to tentatively move into a gradual recovery phase.

2020 IT spending levels in the USA

Confidence levels are still especially weak in the USA, where they have continued to trend down since the crisis began. US firms are a little more confident about the overall economy than two weeks ago, but conversely less confident about their own IT budgets for the year as a whole.

“The survey results have diverged with businesses in most countries now expressing less confidence about their own spending than about the broader economy,” said Stephen Minton, vice president with IDC‘s Customer Insights & Analysis group.

“This could just reflect the fact that we’re still in the middle of the second quarter when the biggest spending cuts are likely to be concentrated and the scale of the short-term impact has been even worse than some firms expected. In fact, survey results are now closer in line with market indicators in terms of the scale of IT spending decline projected for 2020 as a whole.”

The index is based partly on a global survey of enterprise IT buyers, and partly on a composite of market indicators which are calibrated with country-level analyst inputs relating to medical infection rates, social distancing, travel restrictions, public life, and government stimulus.

A score above 1000 indicates that IT spending is expected to increase, while a score below 1000 points towards a likely decline.

Business confidence had been improving steadily in Asia/Pacific, but the picture is more complex according to the latest poll. IT spending is still projected to increase in China, where the economy has moved more quickly from a containment to recovery mode, but confidence levels plunged in India and even declined in Korea where moves to ease lockdown measures appeared to trigger some instances of infections increasing again.

“The recovery phase in the second half of the year will be unpredictable and there may be volatility in survey results as businesses react to anxiety around a possible second wave of infections,” said Minton.

“The first phase of this crisis was uniformly bad for everyone, but the next chapter will be very localized and dependent on a delicate balance of medical and economic factors. Not surprisingly, the latest survey results support a sense that IT buyers remain cautious in this type of economic climate and continue to be vigilant in the near term.

“Moreover, we have now entered a phase where some companies are being forced into bankruptcy or employee reductions, which will have inevitable implications for tech spending in the second half of the year.”