Microsoft has released a new report outlining enterprise cyberattack trends in the past year (July 2019 – June 2020) and offering advice on how organizations can protect themselves.

Based on over 8 trillion daily security signals and observations from the company’s security and threat intelligence experts, the Microsoft Digital Defense Report 2020 draws a distinction between attacks mounted by cybercriminals and those by nation-state attackers.

In the past year, cybercriminals:

More often than not, phishing emails impersonate a well-known service such as Office 365 (Microsoft), Zoom, Amazon or Apple, in an attempt to harvest login credentials.

“While credential phishing and BEC continue to be the dominant variations, we also see attacks on a user’s identity and credential being attempted via password reuse and password spray attacks using legacy email protocols such as IMAP and SMTP,” Microsoft noted.

One of the biggest and most disruptive cybercrime threat in the past year was ransomware – particularly “human-operated” ransomware wielded by gangs that target ogranizations they believe will part with big sums if affected.

These gangs sweep the internet for easy entry points or use commodity malware to gain access to company networks and change ransomware payloads and attack tools depending on the “terrain” they landed in (and to avoid attribution).

“Ransomware criminals are intimately familiar with systems management concepts and the struggles IT departments face. Attack patterns demonstrate that cybercriminals know when there will be change freezes, such as holidays, that will impact an organization’s ability to make changes (such as patching) to harden their networks,” Microsoft explained.

“They’re aware of when there are business needs that will make businesses more willing to pay ransoms than take downtime, such as during billing cycles in the health, finance, and legal industries. Targeting networks where critical work was needed during the COVID-19 pandemic, and also specifically attacking remote access devices during a time when unprecedented numbers of people were working remotely, are examples of this level of knowledge.”

Some of them have even shortened their in-network dwell time before deploying the ransomware, going from initial entry to ransoming the entire network in less than 45 minutes.

Gerrit Lansing, Field CTO, Stealthbits, commented that the speed at which a targeted ransomware attack can happen is really determined by one thing: how quickly an adversary can compromise administrative privileges in Microsoft Active Directory.

“Going from initial infiltration to total ownership of Active Directory can be a matter of seconds. Once these privileges are compromised, an adversary’s ability to deploy ransomware to all machines joined to Active Directory is unfettered, which explains how an adversary can go from initial infiltration to total ransomware infection in such a short period of time,” he noted.

Finally, to counter the threat of supply chain insecurity, Microsoft advises companiessupply to: 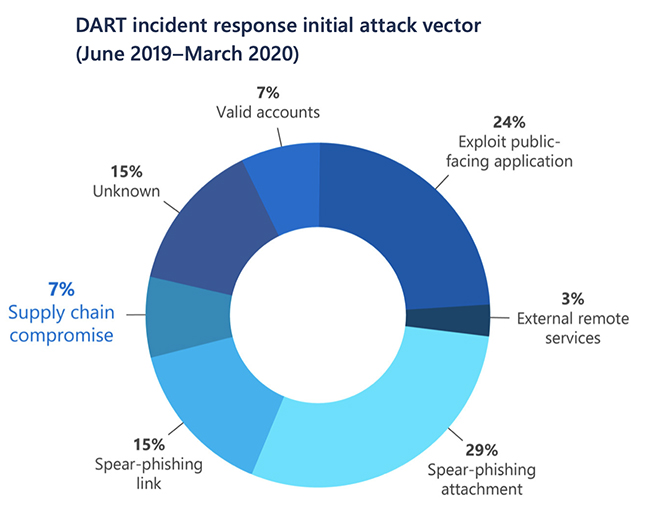 The company has been following and mapping the activities of a number of nation-state actors and has found that – based on the nation state notifications they deliver to their customers – the attackers’ primary targets are not in the critical infrastructure sectors. 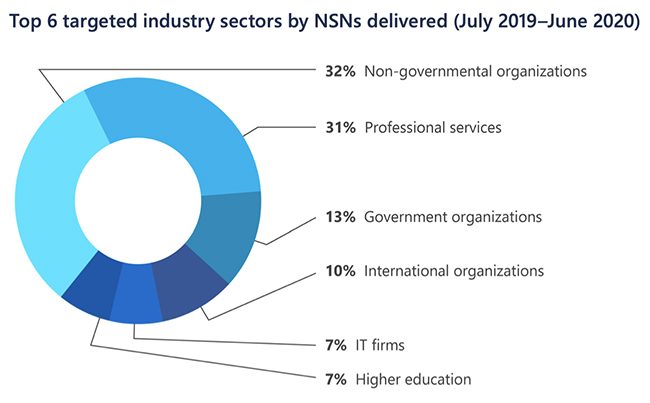 Microsoft found the most common attack techniques used by nation-state actors in the past year are reconnaissance, credential harvesting, malware, and VPN exploits. Web shell-based attacks are also on the rise.

The report delineates steps organizations can take to counter each of these threats as well as to improve their security and the security of their remote workforce.

“Given the leap in attack sophistication in the past year, it is more important than ever that we take steps to establish new rules of the road for cyberspace; that all organizations, whether government agencies or businesses, invest in people and technology to help stop attacks; and that people focus on the basics, including regular application of security updates, comprehensive backup policies, and, especially, enabling MFA. Our data shows that enabling MFA would alone have prevented the vast majority of successful attacks,” the Microsoft Security Team concluded.