SSH machine identities are critical to digital transformation strategies, as they authenticate privileged access between machines and are ubiquitous across enterprise networks. 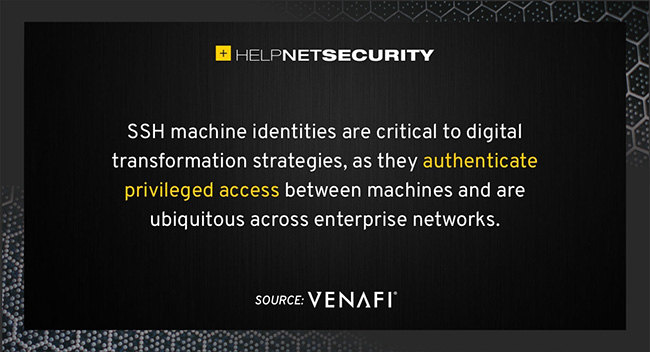 While CIOs say they are concerned about the security risks SSH machine identities pose, survey data indicates they seriously underestimate the scope of these risks.

To better understand the scale of this problem, Venafi surveyed over global 550 CIOs and then compared the survey data with aggregate SSH risk assessments conducted over a two-year time period. More than 14 million SSH client keys and 3.3 million SSH host keys were analyzed and serious SSH security risks were found.

“SSH keys are extremely powerful assets that require careful protection,” said Kevin Jacque, global security architect for Venafi. “It’s not surprising to find so many severe security risks because we know that most organizations do not use any automation to manage them.

“Unfortunately, we should expect these gaps in SSH key management to continue to grow as organizations move more workloads to the cloud where SSH keys are used for nearly everything. The only way to address these risks is to put in place a comprehensive SSH machine identity management solution that provides continuous visibility and leverages automation to enforce policies.”