The application container market is expected to register a CAGR of 29% over the forecast period 2021 to 2026, according to ResearchAndMarkets. 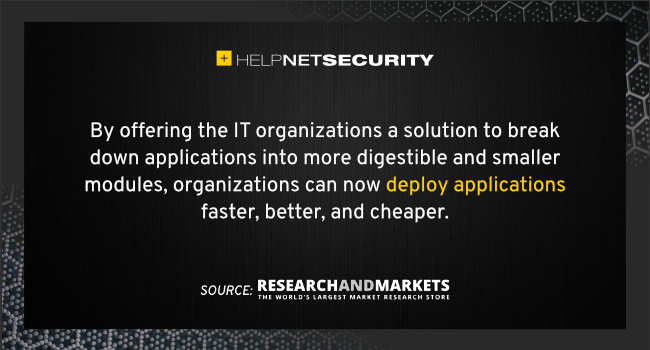 Organizations in the retail and e-commerce industry across the globe are adopting the usage of containers such as the Docker platform to primarily secure and improve their software supply chain and to offer seamless DevOps workflows. For instance, Assa Abloy, a Swedish lock manufacturer with increasingly global operations, adopted various strategies to leverage public cloud, microservices, and containers to fuel their digital transformation further.

Moreover, VisaVisa, one of the world’s largest retail electronic payments network, with Docker Enterprise, refactored their two critical payment processing applications. They are now being run on Docker’s enterprise container platform, supporting millions of transactions per day. After six months in production, the VisaVisa achieved a 10x increase in scalability for those two applications.

While the market is expected to grow significantly, the IT teams report having challenges concerning security. For instance, Tripwire, a cloud company, studied IT security professionals that manage environments with containers. In the study, 60% of them reported having security incidents with their container usage.

However, 47% of them responded that they deployed containers with known vulnerabilities. Such statistics prompt the scope for application containers to be substantial over the forecast period, considering the vendors’ efforts in the market.

The NASA’s Land Information System (LIS) traditionally has been difficult to install due to complex software dependencies. With Docker, LIS installation has become much more straightforward, making it accessible to a larger group of users. This shows how Docker can be used to simplify software installation in a setting that you wouldn’t traditionally associate with DevOps principles or a fixation on continuous delivery.

A segment of the bioinformatics industry is also utilizing Docker container images to build BioShadock, a custom Docker registry for bioinformatics tools and software.

The North American region occupies the largest market share in the market owing to various factors such as the gaining momentum of enterprises in microservices architecture and the ongoing transformation of existing business-critical applications that are driving the growth of the market.

With the continuous increase in financial investments in container technology and the presence of a large number of small and large players in this region is expected to present many opportunities for the market expansion shortly.

The North American region has witnessed the rapid adoption of cloud and related services. The region has an extensive cloud network that is established by major cloud service providers in this region, which is one of the primary factors fueling the growth of the market.

Moreover, the increased demand for DevOps in this region has significantly contributed to market growth.

Further, the region is home to various budding startups that provide solutions related to application containers, including companies such as Bluedata, ClusterHQ, CoreOS, Docker, Sysdig, and Twistlock, etc. Multiple standards/guidelines for securing the containerized infrastructure are emerging in the region.

The National Institute of Standards and Technology (NIST), which is a division of the US Department of Commerce, has published the “NIST Special Publication 800-190: Application Container Security Guide” in 2018, which is a set of guidelines that are now serving as a useful starting point and a baseline for security audits. The instructions primarily break down security concerns and mitigation strategies for each layer of the container stack.

Organizations in the region are primarily adopting containers to accelerate their software delivery and embrace flexibility in their production environment while moving to the cloud.

NIST guidelines also recommend the organizations transform their operational culture and technical processes to support this new way of developing, running, and supporting applications that are made possible by the advent of containerization.