Most chief financial officers (CFOs) are focused on growth and turning the lessons from the pandemic into a road map for the future, according to a survey by Grant Thornton. 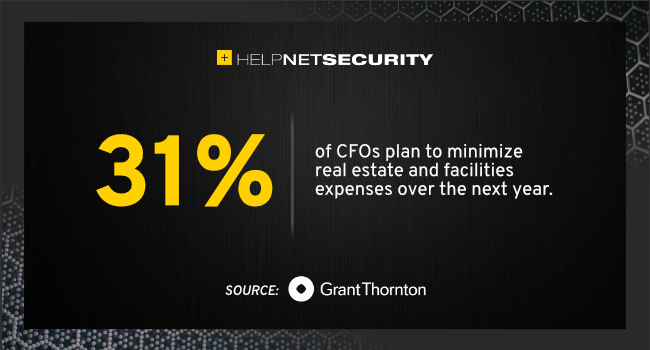 The survey shows that finance leaders found unexpected upsides over the past year: more than 60% of CFOs pointed to improved flexible and remote work environments at their companies — and more than 40% reported improved collaboration. Similarly, 40% noted improved business processes and an ability to better focus on strategy. These findings came as something of a surprise in a year when businesses have severely curtailed face-to-face interactions.

Racial unrest across the country turned the spotlight on DE&I (diversity, equity and inclusion) — while ESG (environmental, social and governance) concerns continue to be a top focus for businesses. More than 75% of respondents reported DE&I and ESG as being “priorities” or being “important” within their organizations, with more than half planning to increase investment in these areas.

When asked how they plan to track DE&I investment, 50% of senior finance executives said they would use employee engagement tools, while 48% indicated recruitment practices. 56% of CFOs said they plan to use software solutions to track ESG investment.

“Consumers and employees alike are demanding increased action and more transparency on DE&I and ESG issues,” said Enzo Santilli, Transformation Advisory Business Line leader at Grant Thornton. “It’s vital for businesses to invest in these areas, and that means learning how best to measure returns on them.”

Investment in technology and cybersecurity as remote work takes hold

When asked about the dramatic expansion of remote work arrangements over the past year, 61% of companies indicated that they expect to increase investment in cybersecurity in the next year to safeguard against breaches attributed to remote work. This investment was followed closely by digital transformation at 60%. When asked to name the three biggest challenges facing their companies, 46% indicated cybersecurity risks, 46% chose technology upgrades and 30% said remote workforce issues.

“Striking a balance between solving immediate needs and longer-term technology investment that can transform a company is a critical challenge,” said Santilli. “Finding an iterative approach that delivers immediate solutions while still driving transformative change is the elusive North Star for most companies.”

When asked about the Biden administration, CFOs appeared to be keeping something of an open mind to policy changes. They were even largely receptive to potential increases in environmental, labor and financial regulations: 44% said the new administration’s plans for environmental regulations would positively impact their businesses.

Forty percent were favorable toward the Biden administration’s labor regulations, and 39% thought financial regulations would impact their businesses positively. When asked about Biden’s trade and supply chain policies, 46% of senior finance executives felt they would help their organizations.

Taxes were the one issue on which CFOs skewed toward negativity. Thirty-nine percent of respondents said the Biden administration’s tax plans will negatively impact their businesses, while 34% said the new administration’s tax policy will be a net positive. Among companies over $1 billion in revenue, 55% expected tax changes to have a negative impact, while only 29% of companies with revenues between $101 and $500 million felt the same.

CFOs were also concerned about policy matters: almost 70% of respondents felt that the lack of policy consistency in Washington will at least somewhat negatively affect their ability to plan future investments. That sentiment was especially pronounced among manufacturing and technology and telecommunications companies, with 83% of respondents in both groups expressing that concern.

“Stability and predictability matter,” added Schenkenberg. “Most businesses are open to reasonable regulation if they can count on a steady hand on the tiller.”

Also of note, the survey found that 84% of private company respondents indicated that SPACs (special purpose acquisition companies) have increased their interest in going public. When asked whether a SPAC or a traditional IPO (initial public offering) would be their choice, respondents were almost equally split, with 49% choosing a SPAC and 51% choosing an IPO.

When polled about the potential pros and cons of SPACs, more than 70% of CFOs said they believe SPACs improve access to capital for start-ups, and 67% said they can help get an IPO to market sooner. However, 69% expect increased SPAC regulation from the Securities and Exchange Commission in 2021, while 55% believe SPACs leave new public companies overvalued. On top of that, 55% think SPACs could create a market bubble.

Denham sums it all up this way: “For CFOs, 2021 could be a transformational year — one where the finance function transitions from crisis management to growth. Whether it be investment in technology, social change or looking to take a company public, the old ways of doing things will no longer work. Finance executives must apply the lessons learned throughout the pandemic and create a new path forward.”