There is an industry-wide cloud permissions gap crisis, leaving countless organizations at risk due to improper identity and access management (IAM), a CloudKnox Security report reveals. 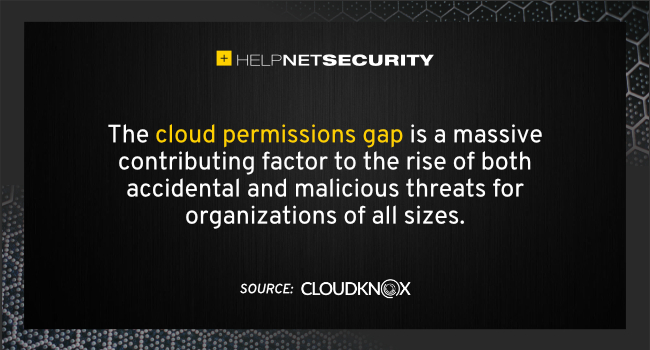 The report findings underscore the fact that attackers can leverage over-privileged identities to traverse laterally, elevate permissions and cause extensive data exfiltration.

“The focus on digital transformation over the last few years—and accelerated throughout 2020—has led to a significant delta between permissions granted and permissions used in the cloud. This cloud permissions gap is a massive contributing factor to the rise of both accidental and malicious threats for organizations of all sizes,” said Raj Mallempati, COO of CloudKnox.

“Permissions misuse or abuse can allow both human and machine identities to create and destroy portions of the cloud infrastructure; and without right-sizing these permissions, enforcing least privilege and zero trust access, these identities have the potential to become CISOs’ worst nightmares.”

Many contributor roles inactive or over permissioned

Among the findings, the data underscores this cause for concern. More than 40% of AWS roles were reported as inactive or over permissioned, putting these organizations at risk of a costly breach should a bad actor breach one of these roles.

More than 70% of Azure subscriptions have identities with over-permissive contributor roles, giving hackers the opportunity to control IAM should they gain access as a contributor.