Enterprises have a deep appreciation for the value of open source software with 100% of the information technology (IT) decision-makers in a recent survey saying that “using open source provides benefits for their organization.” The survey of 200 IT decision-makers was conducted by Vanson Bourne. 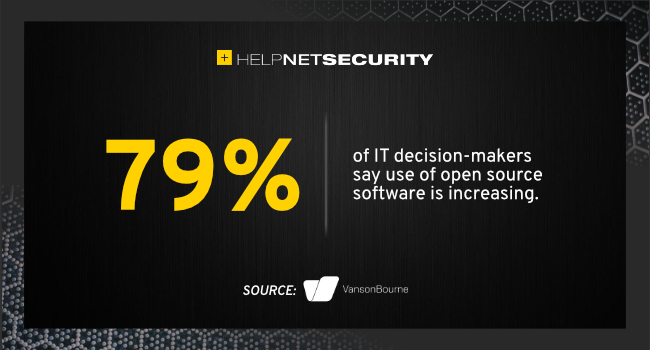 Use of open source software increasing among enterprises

Over the past disruptive 12 months, use of open source software was reported as increasing by 79% of respondents.

Of the 200 respondents, 25% were from medium-size enterprises of 500-999 employees and 75% were from large enterprises with more than 1,000 employees. They came from a cross-section of industries and had knowledge of open source software.

Transition to the cloud accelerated by the pandemic

The transition to the cloud was accelerated by the worldwide pandemic and demand for flexible, fast, and reliable technology. However, it’s likely the increase in demand led to an increase in costs – 68% of respondents say that cloud infrastructure has become more expensive in the past year.

Nearly half of survey respondents indicated concerns over changing open source licenses, such as the Business Source License (BSL) and Server Side Public License (SSPL). Respondents selected the following drawbacks: it will increase costs (44%); it encourages lock-in (37%); discourages engagement from the open source community (34%); and discourages growth in the open source market (26%).