More than 90 percent of CISOs rely on outdated, report-based threat intelligence that is often too old to inform decisions, according to Cybersixgill. 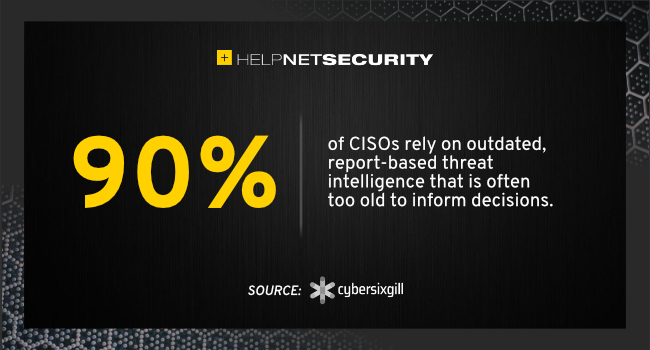 The survey also found that 77 percent of CISOs said that metrics related to the efficiency of incident response and response bottlenecks were key performance indicators.

The survey of 150 CISOs at firms with at least 10,000 employees or $1 billion in revenue was conducted by Global Surveyz in February and March 2021 to foster a better understanding of the state of threat intelligence, and the focus that today’s companies are placing on these vital technologies.

The report showed that executives are acutely aware of their blind spots, because the tools that offer better visibility also impact the metrics on which they are judged by boards and CEOs.

“Boards should encourage CISOs and their teams to explore new approaches, such as agile threat intelligence, to tackle these challenges more effectively.”

Despite massive changes in business operations and security priorities over the past year, CISOs noted that their biggest knowledge gaps were around threat intelligence processing (37 percent) and vulnerability management (21 percent). Only 11 percent of CISOs admitted COVID-19 related knowledge gaps were their largest concern.

“This research clearly depicts the concerns and priorities of CISOs at some of the largest companies in the world,“ continued Meira. “What we found is that there is a consistent need for enterprises to adopt automated, iterative, and continuous intelligence-driven processes in order to evolve and meet today’s security challenges.”