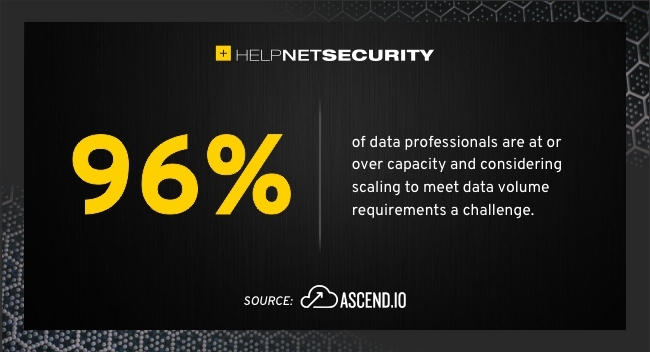 Demonstrating the current pressures many data teams face, the research found that 96% of teams are at or over capacity – down only 1% from the 2020 study.

93% of respondents anticipate the number of data pipelines in their organization to increase between now and the end of the year – with 56% projecting the number of data pipelines to increase by more than 50%. This surge appears to be affecting some roles more than others, with data scientists 2.4x more likely than other roles to anticipate significant growth in pipeline demands.

Encouragingly, 79% of respondents indicated that their infrastructure and systems are able to scale to meet their increased data volume processing needs, which further highlights that the new problem with scale is focused on team capacity and less on technology capacity.

Amid the significant increase in the number of data pipelines across their organization, 74% of data professionals indicated their organization’s need for data products is growing faster than their team size. This was especially true for data engineer respondents, of which 81% cited the need for data products was increasing at a faster rate than their team size.

“Data pipelines are fueling nearly every data-driven initiative across the business,” said Sean Knapp, CEO, Ascend.io. “However, as innovations at the infrastructure layer continue to enable processing of greater volumes and velocities of data, businesses face a new scaling challenge: how to enable their teams to achieve more, and faster. Our research shows that team sizes are not scaling at a fast enough rate to keep up with the needs of the business. Combined with our data that highlights almost every data professional today is already at capacity, this leaves little room for strategic work and innovation.”

Further evidence points to a growing backlog of data engineering tasks across teams. In fact, the most common bottlenecks across teams include the maintenance of existing and legacy data systems (39%), data system setup and prototyping (30%), and needing to ask for access to data or systems (26%). Among the respondents, data scientists reported the greatest need to ask for access to data at 39%.

Knapp continued, “Across the board, our research shows that data engineering has become a significant roadblock for many teams. Simply put, data engineers are overburdened with building and maintaining mission-critical yet fragile pipelines.

This can lead to significant delays for downstream users, as well as drive many teams to address data engineering bottlenecks by attempting to self-serve the data they need access to, often with mixed results, depending on the maturity of their in-house platforms. As a result, each team becomes overwhelmed with their own workload – a dynamic that can quickly lead to organizational friction, if not properly addressed, as well as inhibit the ability to meet the data needs of the business.”

Data teams turn to automation, yet are wary of no-code tools

Data teams are seeking technology solutions to overcome their bandwidth limitations and do more, faster. When asked how they plan to increase bandwidth across their team, 53% of respondents plan to buy new products or tools or implement automation technology (53%). Additional means to increase bandwidth include hiring more staff (47%) and replatforming and retiring legacy technologies (30%).

As data teams evaluate new solutions, concerns remain around the usability of low- and no-code technology. According to the previous study, 80% of respondents reported they were already using or considering low-and no-code solutions to increase their team’s bandwidth. Interestingly, the 2021 research indicates that only 4% of data professionals prefer a no-code user interface.

However, that number jumps to 73% if the solutions offered the flexibility of using both low- and no-code user interfaces in conjunction with higher code options, signaling a tremendous surge in interest for flexible coding (flex-code) approaches.

“In recent years, there has been a marked increase in the number of low- and no-code technologies available in the market,” said Knapp. “Despite the many benefits of these tools, businesses today are quickly discovering they also carry serious limitations. Many low- and no-code solutions don’t allow teams to customize code when needed for more complex business logic.

“The end result is that while making 95% of the job easier, the last 5% becomes impossible. With this in mind, it’s no wonder that 73% of data teams indicated they would be more likely to use a low- or no-code tool if it offered the ability to use their preferred programming language.”