One-third of adults who have been in a romantic relationship admit to cyberstalking their current or former partners, a special addendum to the 2021 Norton Cyber Safety Insights Report has revealed. 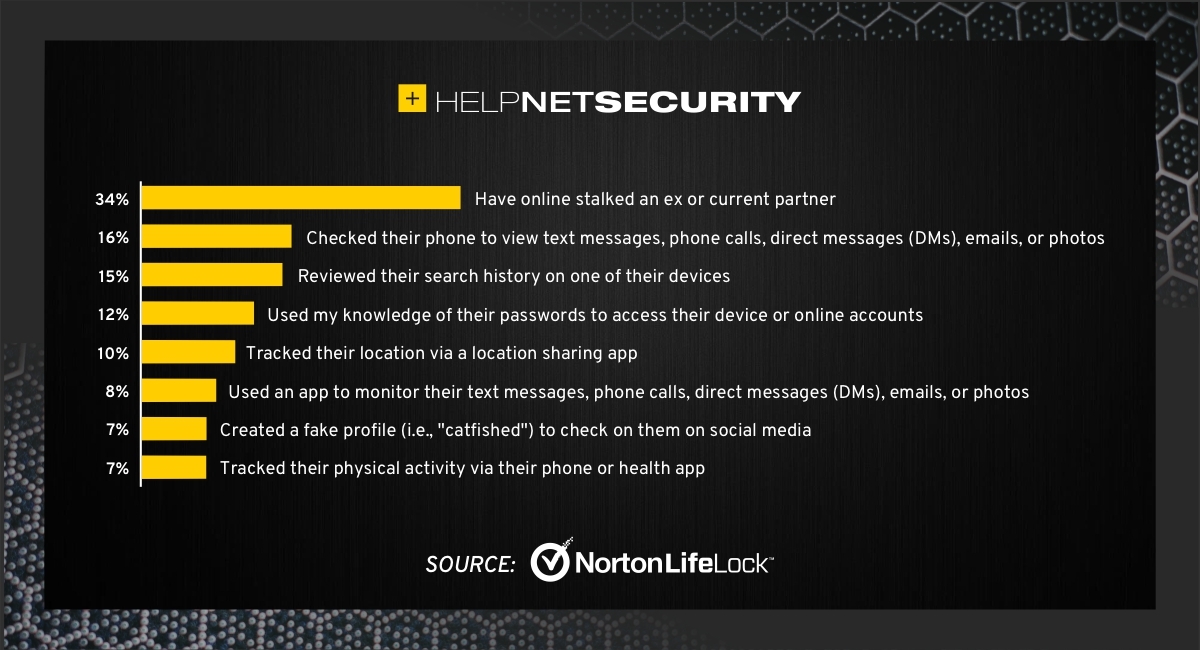 The research was conducted online by The Harris Poll on behalf of NortonLifeLock among 10,030 adults (aged 18+) in 10 countries (Australia, France, Germany, India, Italy, Japan, the Netherlands, New Zealand, the UK, and the US).

Three in five Gen Z and Millennial American adults who have been in a romantic relationship (60% of those ages 18-39) admit to “stalking” an ex or current partner online by checking in on them without their knowledge or consent, more than double the percentage of Americans 40 years old or older (24%).

“Perhaps the most alarming finding is that 42% of the younger Americans who have been a romantic relationship believe their significant other is at least somewhat likely to download an application – otherwise known as creepware or stalkerware – on their device(s) to monitor activity like text messages, phone calls, direct messages, emails and photos,” Kevin Roundy, technical director and stalkerware specialist with Norton Labs, NortonLifeLock’s research division, told Help Net Security.

“This figure is three times the percentage of Americans age 40 or older (14%). This is a concerning finding in that it hints at a major erosion in privacy expectations of the younger generation. The causes are not clear, but younger Americans seem to have lower expectations of one another, and they seem less likely to believe that they have a right to privacy or at least, they have much lower expectations that privacy can be achieved.”

The study’s results show more than one-third of Americans ages 18-39 believe it is harmless to stalk a current or former partner online (35%), while just one in 10 Americans who are 40 or older agrees (11%). Younger Americans are also three times more likely than those 40 or older to agree online stalking is okay if one or both partners have cheated or are suspected of cheating (39% vs. 11%) and admit they would be more likely to stalk a lover or an ex online if they knew they would not get caught (36% vs. 11%).

Of note, more than one in 10 Americans between the ages of 18 and 39 who have been in a romantic relationship (14%) acknowledge they have used an app to secretly monitor their significant other’s device activity.

“We issue warnings to customers alerting them of potential stalkerware apps on their devices, and our latest threat telemetry shows that use of this invasive technology is steadily climbing. Between September 2020 and May 2021, our research team found a 63% uptick in the number of devices infected with stalkerware, amounting to more than 250,000 compromised devices per month,” Roundy remarked.

“It’s alarming to think about this increase within the context of our study. Many young Americans are saying it is at least somewhat likely these invasive apps will be part of their current romantic relationships (42%). With recent depictions of online stalking and stalkerware technology featured in TV shows and other pop culture, it’s concerning to think that these romanticized dramatizations may be influencing dating standards in modern day romance.”

Additional findings on US adults from the report show that in the US, men are three times as likely as women to use invasive apps to spy on a significant other (13% compared to 4%). Men are also more likely than women to track a current or former partner’s location (14% vs. 8%) and physical activity (10% vs. 3%) online.

Although many couples may be spending more time together in lockdown, the most common online stalking behaviors remain the same: checking their current or former partner’s phone (19%) and reviewing their partner’s search history on one of their devices (16%) without their knowledge or consent.

“Despite the rise of stalkerware in the past year – our report also found that 86% of adults are unfamiliar with stalkerware, 11% are somewhat familiar and 4% are very familiar – questioning how stalkerware is on the rise, yet people don’t know what it is, how to identify it or steps to take if they find it on their device,” Roundy noted. 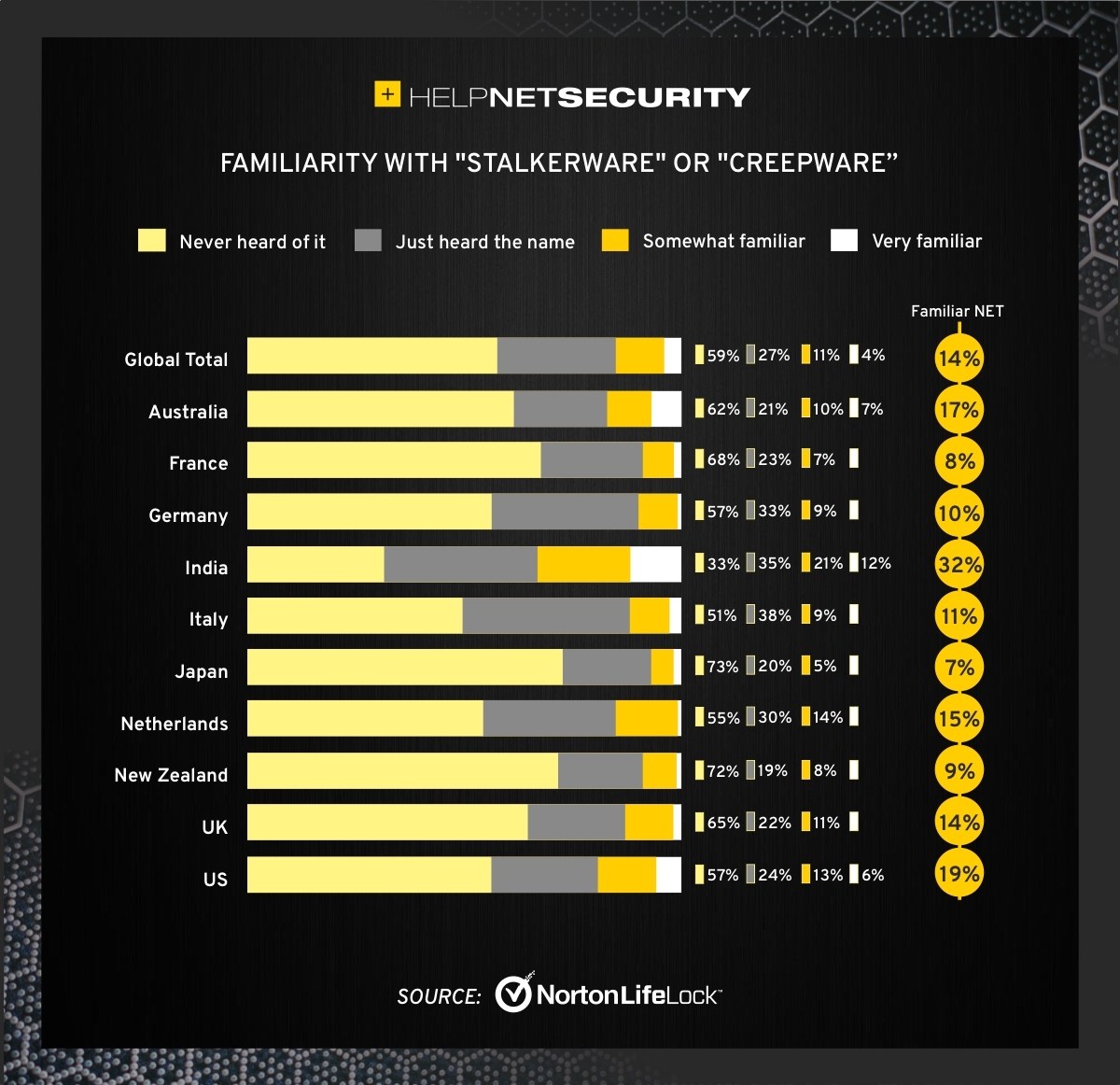 But, across the globe, cyberstalking isn’t unusual. 34% of global consumers who have been in a romantic relationship admit to checking on a former or current partner online without their knowledge or consent. The percentage is especially high in India (74%) and low in Japan (9%), while the percentage for the rest of the countries falls somewhere between 27% and 37%.

In general, the most common reason given for checking in on a romantic partner is curiosity. India is, again, an outlier here, with “safety” taking top place on the list and, interestingly enough, “lack of trust” is given as the main reason by most Dutch people who answered the question.

What to do if you’re being tracked?

“When online creeping manifests into a compulsive pattern or evolves to use technology and tactics to discreetly track activity on someone’s personal device or harass them online, it becomes a serious issue of cyberstalking,” said Roundy. “Cyberstalking can take on many forms, but the common denominator is that it is unwanted, invasive, and obsessive.”

In 2019, NortonLifeLock became a founding member of the Coalition Against Stalkerware, joining over 30 organizations from technology providers to nonprofits serving domestic violence victims to pool tools and resources in the fight against this invasive technology. Together with the Coalition, Norton is actively working towards goals like improving detection and mitigation of stalkerware, developing best practices for ethical software development, and increasing technical capacity of survivors and advocacy organizations.

What should people do if they learn their ex or significant other is tracking them?