Despite high adoption rates of cloud native technologies in recent years, enterprises have yet to cross the chasm to full adoption, but they’re quickly moving in that direction, according to initial results of a survey released by Canonical. 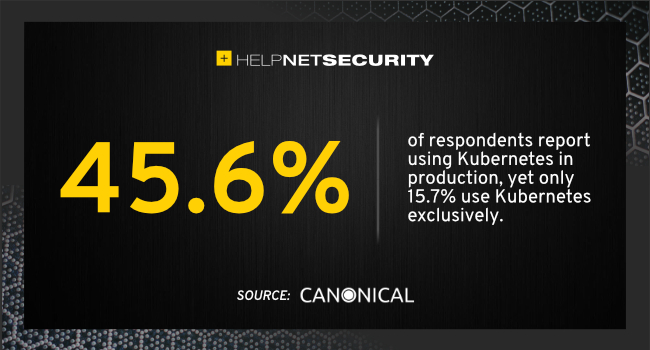 The report, which is still open for participation, has surveyed 1,200 global IT professionals so far on more than 40 topics about their usage of Kubernetes, bare metal, VMs, containers, and serverless applications.

Showing the multi-dimensional nature of today’s cloud native technology landscape, the survey found that while 45.6 percent of respondents report using Kubernetes in production, only 15.7 percent use Kubernetes exclusively.

Nearly 30 percent run applications on a mix of bare metal, VMs and Kubernetes, 15.3 percent do so mostly on VMs with plans to fully migrate to Kubernetes, and 13.1 percent are on VMs and evaluating Kubernetes for deployment.

“I think this clearly shows we’ve got a long way to go before we’ve properly modernized the infrastructure,” James Strachan, Distinguished Engineer at Cloudbees, said in the report.

Nearly 78 percent of respondents reported at least one hybrid or multi-cloud use case in production in their organization. This number is likely higher than reported when teams consider SaaS or 3rd party managed services – those beyond what they directly manage themselves.

As adoption of hybrid and multi-cloud continues to grow, new challenges are arising, particularly around managing the sprawl of diverse bare metal, VM, and Kubernetes technologies, the survey found.

Operations are said to be the next big challenge, with businesses looking at automation through application rather than configuration management. To that end nearly 30 percent say that trying out operators is on their to-do list, with a further 17 percent already experimenting with them, and 14 percent using them in production.

The state of Kubernetes and cloud native technologies

Kelsey Hightower, a developer advocate at Google, said of the in-house skills concern, “They don’t realize they already have a lot of the required skills. Kubernetes is not where these skills originated… (These are) new terms used for older concepts. Many people lack confidence, because they believe that the fundamentals have changed somehow.”

On the other hand, said Alexis Richardson, CEO of Weaveworks, “When people worry about the basics, i.e. security, costs, resources, observability and configuration, this is an indication that they haven’t yet crossed the chasm of full enterprise adoption.”

In a lighter note in the report, 22.5% of respondents said making coffee is the one thing they would like to do with K8s and currently can’t. Eleven percent said “I can do everything I need using Kubernetes”, an attitude Richardson humorously described as “Kubris.”