There are more than 290 fully publicly disclosed private network deployments worldwide, according to a research published by ABI Research. 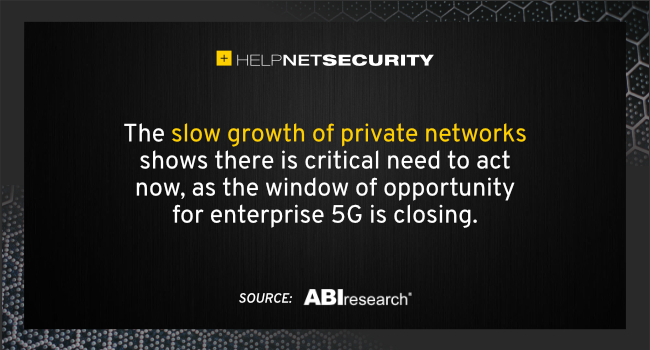 In China, the industry assumes there are several hundred private network deployments, but only 40 are fully publicly disclosed. Germany reports a total of 146 licenses granted to enterprises for the deployment of a mobile private network, with other European countries lagging far behind.

Interest in private network is slowing down

Germany’s interest in private networks is fading, however. While the Bundesnetzagentur counted more than 80 new applications for local licenses in the second half of 2020, there were only 20 more applications in the second quarter of 2021. The fact that interest in private network is slowing down indicates that the telco industry needs to radically rethink their approach to enterprise 5G or miss out on the opportunity entirely.

On the contrary, in Germany, most private networks are constituted by system integrators or factory automation solution vendors, aiming to showcase 5G capabilities and test solutions to integrate into their product offerings.

“Most private network deployments in Germany are essentially sales-driven and only a few deployments are really used to enhance enterprise workflows and operations. The fact that these sales-driven activities dominate the number of private networks in Germany is yet another warning sign that enterprise 5G still has a long way to go,” explains Leo Gergs, Senior Analyst for Private Networks and Enterprise Connectivity at ABI Research.

The slow growth of private networks shows there is critical need to act now, as the window of opportunity for enterprise 5G is closing. Enterprises are eagerly waiting for the 5G capabilities that they have been promised for more than 3 years. “As these enterprises realize that full support for URLLc and time-sensitive networking will still take years to mature, they are becoming growingly impatient and starting to look at technology alternatives,” Gergs says.

To successfully target the immense enterprise private network opportunity, the telco industry needs to radically rethink their approach. The industry needs to embrace spectrum liberalization initiatives and consider flexible business models that can be adjusted to address heterogenous enterprise requirements.

According to Gergs, “The telco industry must realize that the value proposition for enterprise 5G does not lie in the technology as such, but in the applications it enables. After all, no enterprise cares about whether they deploy 4G or 5G on their premises, as long as the technology solves their pain points.”

Spectrum liberalization initiatives, which allow enterprises access to license or share mobile network spectrum without having to go through a traditional mobile network operator, can act as an important enabler in this context and the fact that more and more of these initiatives are being implemented shows regulators’ willingness to create favorable conditions.

“However, regulators can only do part of the job. It is now up to CSPs, infrastructure vendors, chipset manufacturers, and system integrators to accept their responsibility and deliver on what enterprises have been promised from the beginning,” Gergs concludes.