Transposit announced results from a recent research study about the evolving roles of the CIO and CTO, as well as the extent of and attitudes towards adoption of DevOps practices in enterprises. 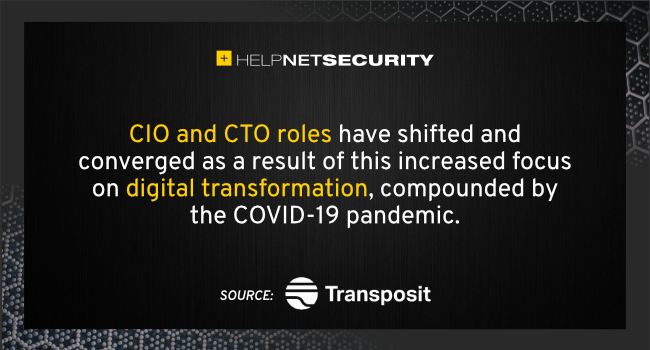 Conducted in July 2021, findings from 415 CIOs and CTOs at medium and large enterprises reveal that these top executive roles have converged at the same time as both positions have taken on significantly increased responsibility for business strategy.

In some organizations that have both CIOs and CTOs, these converging roles have led to overlapping responsibilities and potential friction over ownership of functions, processes or tasks. The findings also show that “rate of innovation” has become a new sought-after competitive advantage when it comes to executing on digital transformation initiatives.

97.8% of executives reported that there was an increased focus on digital transformation within their organization in the past 3 years, with 75.4% of CTOs and CIOs disclosing that this has been the case especially since the pandemic.

Traditionally, CIOs and CTOs have served different roles in companies with the former focused on traditional IT strategy and management and the latter on developing innovative new technology, external customer-facing IT or custom software development. However, the research demonstrates that CIO and CTO roles have shifted and converged as a result of this increased focus on digital transformation, compounded by the COVID-19 pandemic.

91.8% of respondents said that their responsibilities changed in the last 3 years, with 56.4% reporting their role changed significantly. Both are now graded according to key performance indicators (KPIs) related to managing revenue, with 66.3% of CIOs and 78.1% of CTOs saying their position is now directly involved in or leading business strategy.

Shared responsibilities between CIO and CTO roles: Blessing or curse?

With regard to ownership of software development, operating in-house developed software, managing SaaS or operating commercial off-the-shelf software, external customer experience and digital transformation, both CIOs and CTOs share the responsibility for the given areas. In fact, 33.5% say that ownership of most aspects of digital transformation initiatives is a shared responsibility between the CIO and CTO.

“As enterprise technology organizations are increasingly reshaped by a variety of forces ranging from DevOps transformation to lower barriers to technology adoption and rollout, leadership roles have both evolved and proliferated and their reporting structures have shifted,” said Stephen O’Grady, Principal Analyst with RedMonk. “Almost inevitably, then, more businesses today are seeing uncertainty and conflict between CIO, CTO and other roles about precisely who owns what.”

Rate of innovation is now a new competitive advantage

With 85.3% of executives reporting that their budget has increased over the last 3 years, CIOs and CTOs have realized that finding incremental revenue means innovating faster and smarter.

After years as a bleeding edge philosophy, it is clear from the data that DevOps has become a standard practice across enterprises. 87.7% of respondents apply DevOps practices, and 83.4% believe that DevOps is important to digital transformation at their organization.

Organizations have realized the importance of having a mature DevOps strategy to enable teams to innovate faster. 98.1% of CIOs and CTOs plan to expand DevOps practices and 83.4% already have a plan in place to do so.

Of the organizations who implement DevOps practices, most companies regardless of size either have a centrally managed engineering organization or a platform team that provides a paved road for product teams.

“The definition of DevOps is evolving – it no longer means developers own ops,” says Divanny Lamas, CEO at Transposit. “As DevOps moves mainstream into the enterprise, we’re seeing more and more organizations give their ITOps team the charter of managing operations for in-house built software, or build a centralized platform team to provide an operational platform for developers. It’s a trend that is gaining steam.”