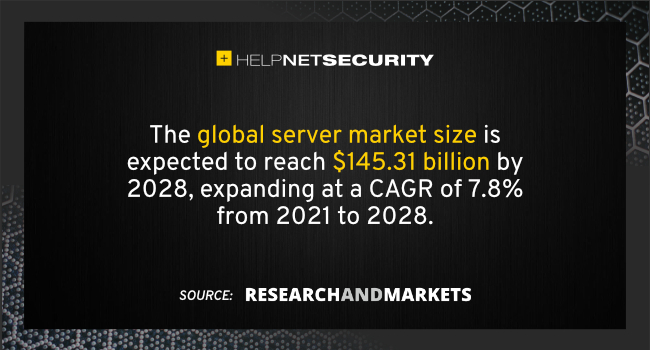 The demand for servers is anticipated to grow considerably over the forecast period owing to the growing focus on the timely update of IT infrastructure worldwide. The rising adoption of data analytics among enterprises to understand consumer trends has resulted in the growing adoption of IT networking equipment.

Furthermore, the rollout of 5G networks and technologies such as the Internet of Things (IoT), cloud computing, and virtualization is expected to fuel the demand for high-performance computing servers.

The rising preference for contactless payments and remote working amid the COVID-19 pandemic is expected to drive the need for high-speed data processing and storage capacity across various industry verticals.

Advanced technologies have paved the way for connected appliances and autonomous vehicles, which has prompted IT infrastructure companies to opt for the latest, advanced storage solutions, including flash memory and solid-state drives (SSD), for storing crucial business data.

Meanwhile, the demanding and changing configurations required by cloud service providers are driving the demand for servers. For instance, in May 2020, Facebook released its third generation Yosemite scalable server, which is equipped with Cooper Lake CPU and six memory modules. Such developments are expected to cause an increase in the average selling prices of servers, which is expected to subsequently benefit the market growth.

Managed data centers allow enterprises to adopt virtual servers by renting the networking equipment, connecting devices and peripherals, and cloud space. The cloud server space can be private or shared, which again allows the enterprises to reduce the total cost of ownership.

The market is witnessing increasing competition between OEMs and Original Design manufacturers (ODMs). OEMs are the companies that manufacture servers as well as sell them through resellers and distributors, while ODMs design and manufacture similar servers and directly sell them to the customer.

Besides, ODMs cater to the demand for servers customized according to the user configuration. The increasing demand for customized requirements is expected to drive server sales through ODMs.

The market is characterized by intense competition among established market players. Key market players are focused on product innovation and the introduction of new technologies to their server portfolios. For instance, in September 2019, Dell EMC introduced new products in its PowerEdge server portfolio.

These new servers are equipped with 2nd Gen AMD EPYC processors, which help to easily manage the platform and offer superior performance to the user. The new servers are built specifically for modern data centers for multi-cloud approaches.

The state of the server market