Spending on compute and storage infrastructure products for cloud infrastructure, including dedicated and shared environments, decreased 2.4% year over year in the second quarter of 2021 (2Q21) to $16.8 billion, according to IDC. 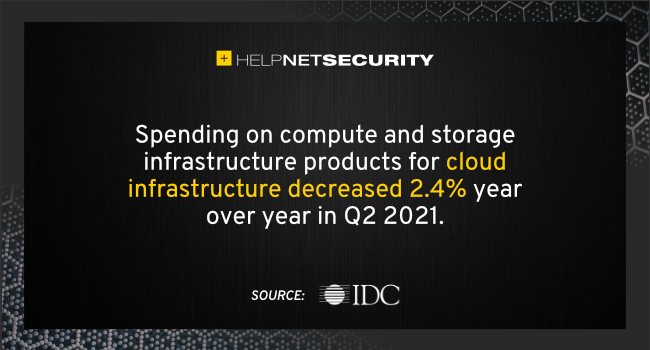 This decrease comes after six quarters of year-over-year growth, and most notably compares to the 39.1% annual growth seen by the market in 2Q20, when the world just entered the pandemic with the first wave of business and country closures causing a spike in investments in cloud services and infrastructure. Investments in non-cloud infrastructure increased 3.4% year over year in 2Q21 to $13.4 billion recovering from a 7.2% decline in 2Q20.

Spending on shared cloud infrastructure reached $11.9 billion, a decrease of 6.1% compared to 2Q20, and a 17% increase from 1Q21. Weakness in year-over-year demand from public cloud service providers comes after an exceptionally strong 2Q20, in which spending increased 55.5% driven by the spike in demand for cloud services in the first months of the pandemic. Such discrepancy in growth rates attributable to exceptional events creates “hard” comparisons that don’t reflect long-term trends.

Despite weakness in 2Q21, cloud infrastructure spending expected to grow

At the regional level the year-over-year changes in spending on cloud infrastructure were mixed: spending increased across the Asia/Pacific subregions, in Latin America, Canada, and Central and Eastern Europe, and declined in the United States, Western Europe, and the Middle East and Africa.