Some of the world’s largest companies across retail, banking, healthcare, energy and many other sectors, including Fortune 500, Global 500 and governments are failing to prevent Magecart attacks, Cyberpion research revealed. 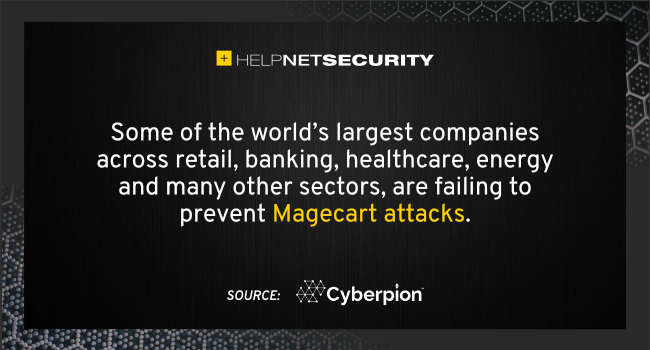 Magecart is the common name for a style of cyber attack in which hackers compromise third party code (typically Javascript that runs in browsers) to steal, or scrape, information such as credit card data from web-applications (e.g. online checkout software) or websites that incorporate the code.

The research analyzed more than 30,000 vulnerabilities over the last two years and found significant weaknesses in modern security platforms and processes to identify and mitigate exploits related to Magecart attacks.

There were also severe lapses in enterprises disclosing security vulnerabilities or exploits occurring along their digital supply chains to their customers, ultimately placing all connected organizations at risk of a breach.

Web skimming continues to be a real threat to online merchants and shoppers with attacks severely impacting organizations including British Airways and Ticketmaster in 2018, Forbes in 2019, plus local US government portals and messaging service Telegram 2020.

“Our conclusion from the analysis is that as of today, organizations fail to face Magecart threats and detect the vulnerabilities and exploits that hackers leverage to conduct these attacks,” said Cyberpion CEO Nethanel Gelernter.

“Victims are often the last to know as it’s only later that organizations find that their data was sold or exploited, with the problem extending beyond any single vendor or client relationship. For enterprises in particular, Magecart attacks pose a significant challenge because it is problematic to set up a solution at scale.”