Vaccine passport technology has become an intrinsic part of society over the past year, as governments across the globe search for solutions that help protect citizens from the pandemic. This new familiarity could soon lead to digital IDs becoming an accepted method of verification, according to a research of over 12,000 consumers, including more than 2,000 in the UK, from Okta and Statista. 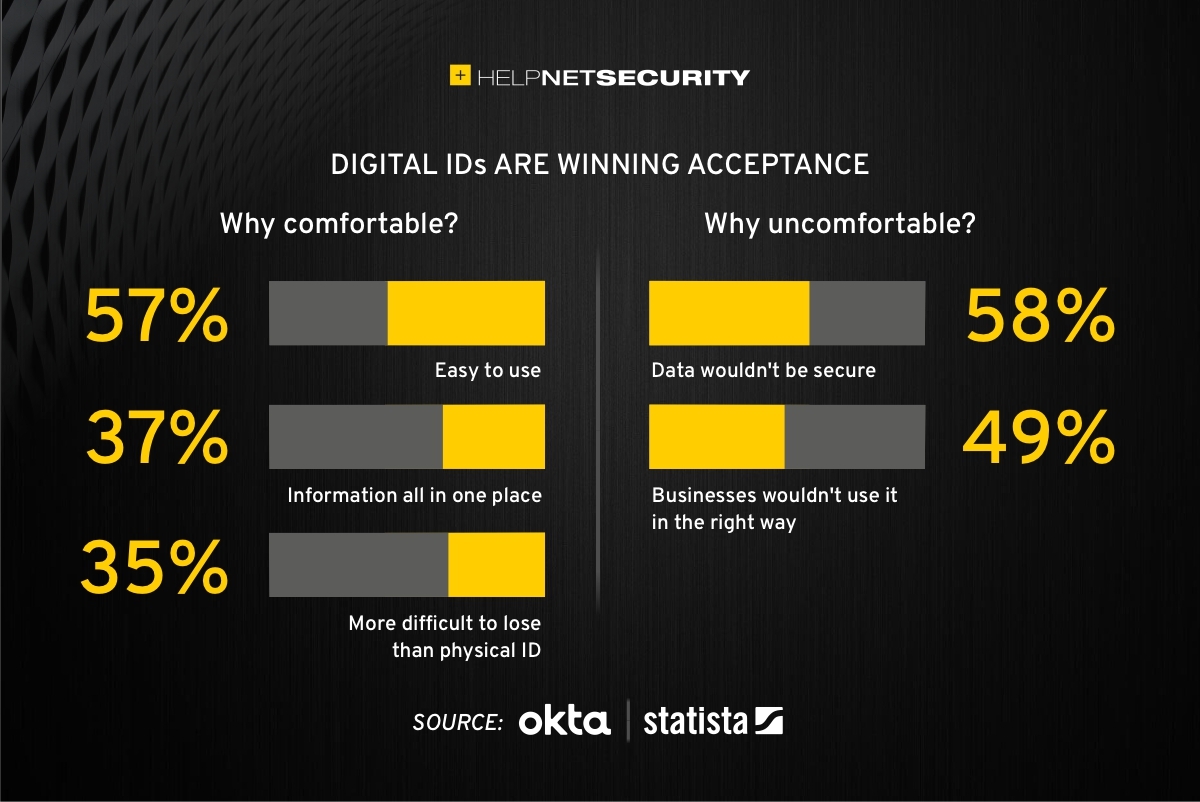 Most are comfortable with digital IDs as a method of verification

76% of Brits would be comfortable having some of their data incorporated into a digital ID, because they sound easy to use (57%), all their information would be in one place (37%), and they’re more difficult to lose than physical IDs (35%). 29% also feel their personal data would be sufficiently protected.

However, 24% do not want a digital ID, because they worry that their data wouldn’t be secure (58%), and that businesses would not use it in the right way (59%).

“Digital ID schemes and programmes are underway in countries like Estonia, Australia, Canada and New Zealand, while the UK is currently in the early phases of exploring its own digital identity project,” comments Ben King, CSO EMEA at Okta.

“Governments and organizations have a key role to play in demonstrating the privacy and safety of these kinds of initiatives in order to win over the public. Trust is key here. If one data mishap were to occur, public trust would be lost, and the whole system could come crumbling down.”

51% of Brits support government-led vaccine passport technology, with only 16% opposing it. This comes following wide adoption of the NHS COVID-19 App in the UK, with vaccine passports required for some venues and events.

“Familiarity with vaccine passport tech is laying the foundations for digital IDs, without many people even realising,” adds King. “The world has gradually been moving towards innovative digital technology across all areas of society, and the pandemic accelerated changes that were already underway. Digital IDs are a natural evolution for future verification. But the technology needs to be finetuned before it hits the mainstream.”

Public vs private sector: Whose responsibility is it?

This comes amid a backdrop of new regulations coming into play to better protect citizens online, such as the UK’s Online Safety Bill, a proposal introduced by the government to require technology companies to protect their users’ rights to freedom of expression and privacy.

60% of Brits support GDPR, primarily because they feel that governments, states and institutions should be responsible for data privacy initiatives (71%). Many also feel like their data is better protected with GDPR (38%), and that they have more control over it (34%).

“GDPR – now the UK’s Data Protection Act – has increased public awareness of personal data, and the importance of protecting it,” says King. “The Online Safety Bill is a good example of how the public and private sector are both playing a role in protecting consumer data, with the government drawing up the proposal, and organizations making the necessary arrangements to adhere to the regulations. More visibility of how governments and private companies are taking these steps will help to better nurture consumer trust. Technology like customer identity and access management (CIAM) would allow individuals to control what organizations know about them and how their data is used, whilst ensuring it is kept in one safe, secure place.”

Brits show a fairly even split towards trusting (33%) and distrusting (34%) the government’s digital services, such as government websites and log-in portals for public sector services.

People trust the government’s digital services because they have never encountered an issue (51%), trust the government to protect their data (46%) and feel they are easy to use (42%). However, if this trust were to be abused, 37% say they would be inclined to change who they vote for politically.

In contrast, Brits that distrust government digital services do so due to data fears (56%), overcomplicated transactions (21%), and previously encountered issues (20%). The most important attributes to consumers when dealing with public sector services include secure log-ins (48%), reliability (40%), and simplicity (38%).