84% of IT decision-makers across the US and UK say their organization is currently using more than one cloud platform, as businesses’ demands for more choice, flexibility, and agility pushes multi-cloud mainstream in the year ahead, according to a Wanclouds report. 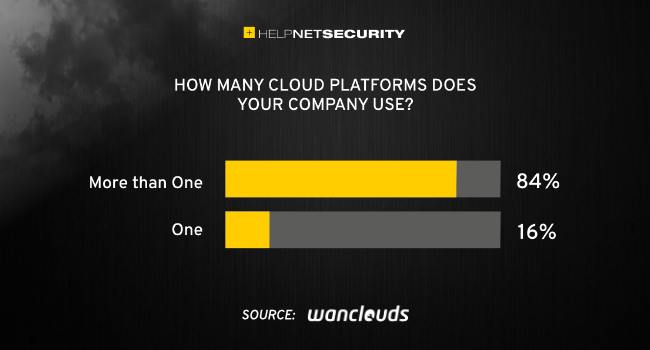 The report found that of companies using multiple cloud platforms, 48% are also taking a hybrid approach by utilizing both public and private clouds.

With the COVID-19 pandemic becoming a catalyst for long-term remote work environments and accelerating digital transformation across industries, conversations surrounding the evolution of cloud-native models have been rife.

To get a better understanding of what these multi and hybrid cloud environments look like, and to identify the common challenges and opportunities shared by developers, IT teams, and companies working to become cloud-native, 416 US and UK IT decision-makers were surveyed in Q4 2021. Respondents included decision-makers from organizations that began their cloud journey two or more years ago (48%), between one and two years ago (42%), and less than a year ago (10%).

As more IT decision-makers look to take advantage of modern cloud environments, they’re increasingly running into longer project runways and the need for bigger budgets. In fact, 48% of US and UK IT decision-makers say the average length of time it takes them to complete a single multi-cloud application migration successfully is 1-2 months.

23% say it takes them up to 6 months. Meanwhile, 35% of respondents highlighted that “it takes bigger budget than expected” as the challenge they most often face when migrating resources across multiple clouds. They also expressed frustration at post-migration costs, with 54% stating that they’re getting hit with ongoing cloud costs or spending that they didn’t plan for.

“The pain of getting hit with unexpected cloud costs is something our team regularly hears from organizations of all sizes and across every industry,” said Faiz Khan, CEO, Wanclouds.

“IT teams have found themselves helpless against hidden charges and a lack of company-wide cloud visibility within their platforms’ billing systems. This new data showcases how widespread these issues are and suggests that cloud providers still have a long way to go to deliver a user experience that meets the evolving needs of their customers.”

“IT leaders looking to take advantage of the scale, elasticity, and resiliency of modern cloud environments are increasingly turning to Kubernetes and containers,” added Khan. “It’s a meaningful shift which requires businesses to rethink a lot about how they do business. As more organizations follow suit, they must minimize cloud-native downtime by migrating their resources in a phased approach and by proactively preparing for unexpected disasters that could thrust them offline for weeks at a time.”