In slightly more than a month, the Conti ransomware collective compromised more than 40 companies worldwide, and the fastest attack took only three days, Group-IB’s noted in its latest report detailing the workings of one of the most prolific ransomware / extortion gangs out there.

In two years, the ransomware operators attacked more than 850 victims including corporations, government agencies, and even a whole country (Costa Rica).

The Conti gang’s existence first came to light in February 2020, when malicious files with the extension “.сonti” appeared on the radar of Group-IB researchers. However, the initial test versions of the malware date back to November 2019.

Since 2020, Conti has been dominating the ransomware scene alongside Maze and Egregor in terms of the number of companies whose data has been encrypted.

In just four months in 2022, the group posted information belonging to 156 companies, making for a total of 859 DLS victims in two years, including 46 in April 2022. The actual number of victims is believed to be significantly higher.

Conti ransomware gang on a roll

Conti and their affiliates attack often and quickly. Group-IB experts analyzed one of the group’s lightning-fast and most productive campaigns, codenamed “ARMattack”. The campaign lasted only about a month (from November 17 to December 20, 2021), but it turned out to be extremely effective.

The attackers compromised more than 40 organizations worldwide. Most attacks were carried out in the US (37%), but the campaign also surged through Europe, with victims in Germany (3%), Switzerland (2%), the Netherlands, Spain, France, the Czech Republic, Sweden, and Denmark (1% each). The group also attacked organizations in the UAE (2%) and India (1%). 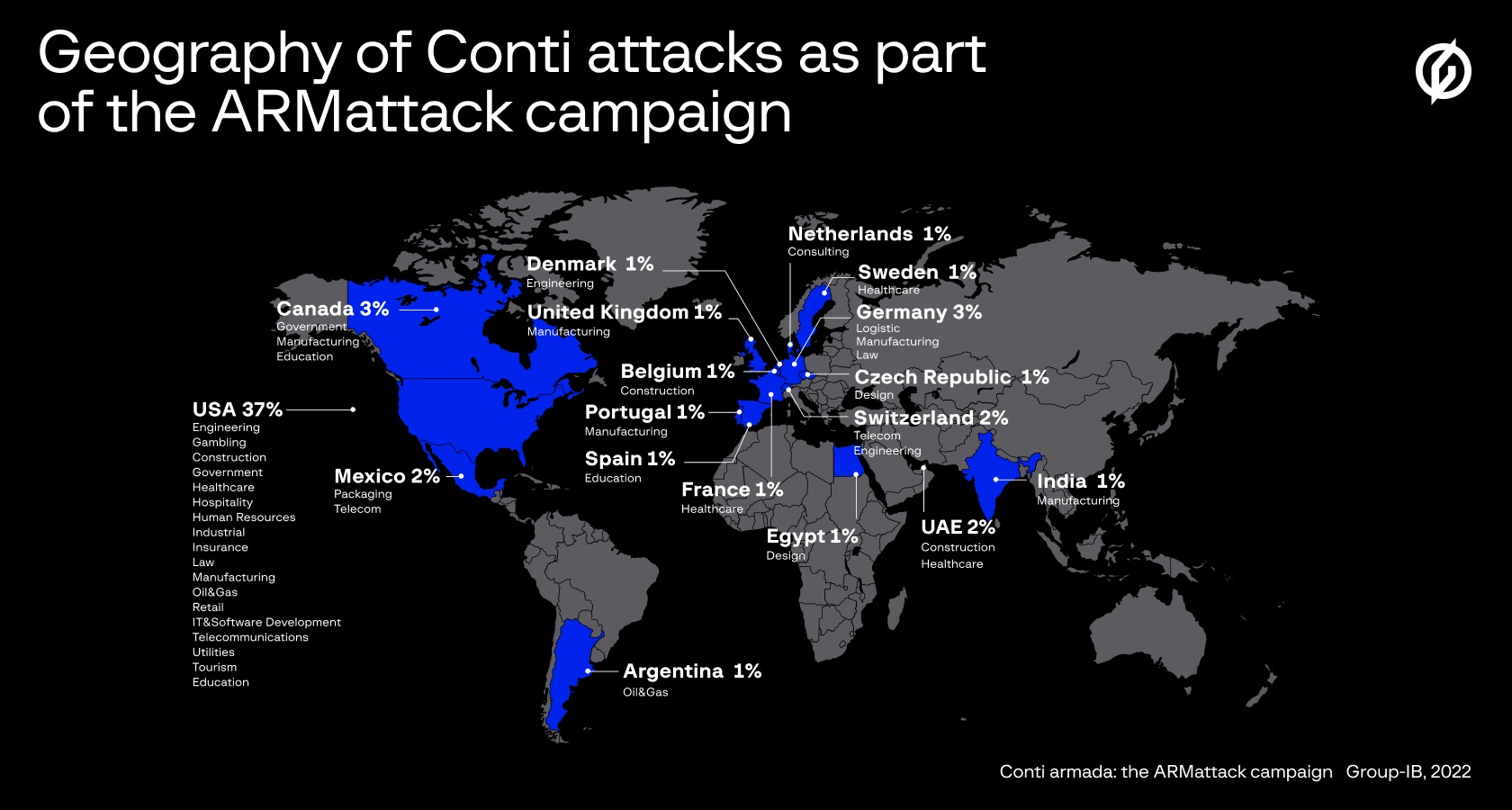 Historically, the top five industries most frequently targeted by Conti are manufacturing (14%), real estate (11.1%), logistics (8.2%), professional services (7.1%), and trade (5.5%). After gaining access to a company’s infrastructure, the threat actors exfiltrate specific documents (most often to determine what organization they are dealing with) and look for files containing passwords (both plaintext and encrypted). Lastly, after acquiring all the necessary privileges and gaining access to all the devices they are interested in, the hackers deploy ransomware to all the devices and run it.

According to the Group-IB Threat Intelligence team, the gang’s fastest attack was carried out in exactly three days, from initial access to data encryption.

Most likely, the group members are located in different time zones; however, the schedule shows their high efficiency: on average, Conti “works” 14 hours a day without holidays (except for “New Year holidays”) and weekends. The group starts working closer to noon (GMT+3) and its activity declines only after 9:00 PM.

The geography of Conti’s attacks is vast but does not include Russia. The group clearly adheres to the unspoken rule among Russian-speaking cybercriminals: do not attack Russian companies. Most attacks occur in the United States (58.4%), followed by Canada (7%), the United Kingdom (6.6%), Germany (5.8%), France (3.9%), and Italy (3.1%).

Another reason behind not targeting Russian companies is that key Conti members refer to themselves as “patriots”. This fact was the cause of an “internal conflict” in the group in February 2022, which resulted in some of Conti’s valuable information being leaked online. The published data included private chat logs, the servers they use, a list of victims, and details of Bitcoin wallets, which stored over 65,000 BTC in total. The leaked chats revealed that the group had faced serious financial difficulties and that their boss had gone off the radar. Yet its members were fully prepared to restart the project after 2 to 3 months.

Despite the “stab in the back” and increased attention from law enforcement, Conti’s appetites continued to increase. They attacked not only large companies, but entire countries as well. Conti’s “cyber war” against Costa Rica in April 2022 led to a state of emergency being declared.

Conti has worked closely with other ransomware operators such as Ryuk, Netwalker, LockBit, and Maze. They even tested Maze’s ransomware, reverse-engineered it, and thereby significantly improved their own. An analysis of the ARMattack campaign revealed that the group’s arsenal included not only previously described Windows tools, but also Linux ransomware: Conti and Hive.

That said, the group tends to create unique tools without reusing code snippets. This way, when compared, the code for their tools will not help identify common patterns. Before the chat logs were leaked, cybersecurity researchers could only assume that some RaaS (Ransomware-as-a-service) affiliate programs were in fact Conti divisions. At the same time, the interaction was extensive. Sometimes Conti used network access from other initial access brokers, other times the gang shared their own access for a modest 20% of the revenue.

Conti has its own HR, R&D, and OSINT departments. There are team leads, regular salary payments, and an incentive program.

One of Conti’s distinctive features is using new vulnerabilities, which helps the group gain initial access. For instance, Conti was seen exploiting the recent CVE-2021-44228, CVE-2021-45046 and CVE-2021-45105 vulnerabilities in the log4j module. Less than a week later, Conti exploited these vulnerabilities to attack vCenter servers.

The leaked chat logs also showed that the group monitors fresh vulnerabilities carefully. One of the tasks from Conti’s CEO to the technical team was to monitor Windows updates and analyze changes made with new patches — which once again highlights the need to install updates as soon as possible. In addition, the Conti crew includes specialists with experience in discovering zero-days.

“Conti’s increased activity and the data leak suggest that ransomware is no longer a game between average malware developers, but an illicit RaaS industry that gives jobs to hundreds of cybercriminals worldwide with various specializations. In this industry, Conti is a notorious player that has in fact created an ‘IT company’ whose goal is to extort large sums,” says Ivan Pisarev, Head of Dynamic Malware Analysis Team at Group-IB’s Threat Intelligence department.

“It is difficult to predict what will happen to Conti in the future: whether it will continue working after a large-scale rebranding or be divided into smaller sub-projects. It is clear, however, that the group will continue its operations, either on its own or with the help of its ‘subsidiary’ projects.”