66% of organizations have changed their cybersecurity strategy as a direct response to the conflict between Russia and Ukraine, while 64% suspect their organization has been either directly targeted or impacted by a nation-state cyber attack, according to Venafi. 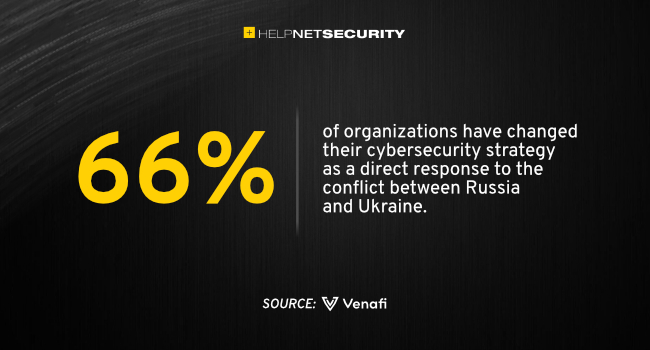 “Cyberwar is here. It doesn’t look like the way some people may have imagined that it would, but security professionals understand that any business can be damaged by nation-states. The reality is that geopolitics and kinetic warfare now must inform cybersecurity strategy,” said Kevin Bocek, vice president, security strategy and threat intelligence at Venafi.

“We’ve known for years that state-backed APT groups are using cybercrime to advance their nations’ wider political and economic goals. Everyone is a target, and unlike a kinetic warfare attack, only you can defend your business against nation-state cyber attacks. There is no cyber-Iron Dome or cyber-NORAD. Every CEO and board must recognize that cybersecurity is one of the top three business risks for everyone, regardless of industry.”

Research has also found that Chinese APT groups are conducting cyberespionage to advance China’s international intelligence, while North Korean groups are funneling the proceeds of cybercrime directly to their country’s weapons programs. The SolarWinds attack is a prime example of the scale and scope of nation-state attacks that leverage compromised machine identities.

The only way to reduce risks of machine identity abuse is through a control plane that provides observability, governance, and reliability.