OpenText announced the Nastiest Malware of 2022, a ranking of the year’s biggest cyber threats. For the fifth year running, experts combed through the data, analysed different behaviours, and determined which malicious payloads are the nastiest. 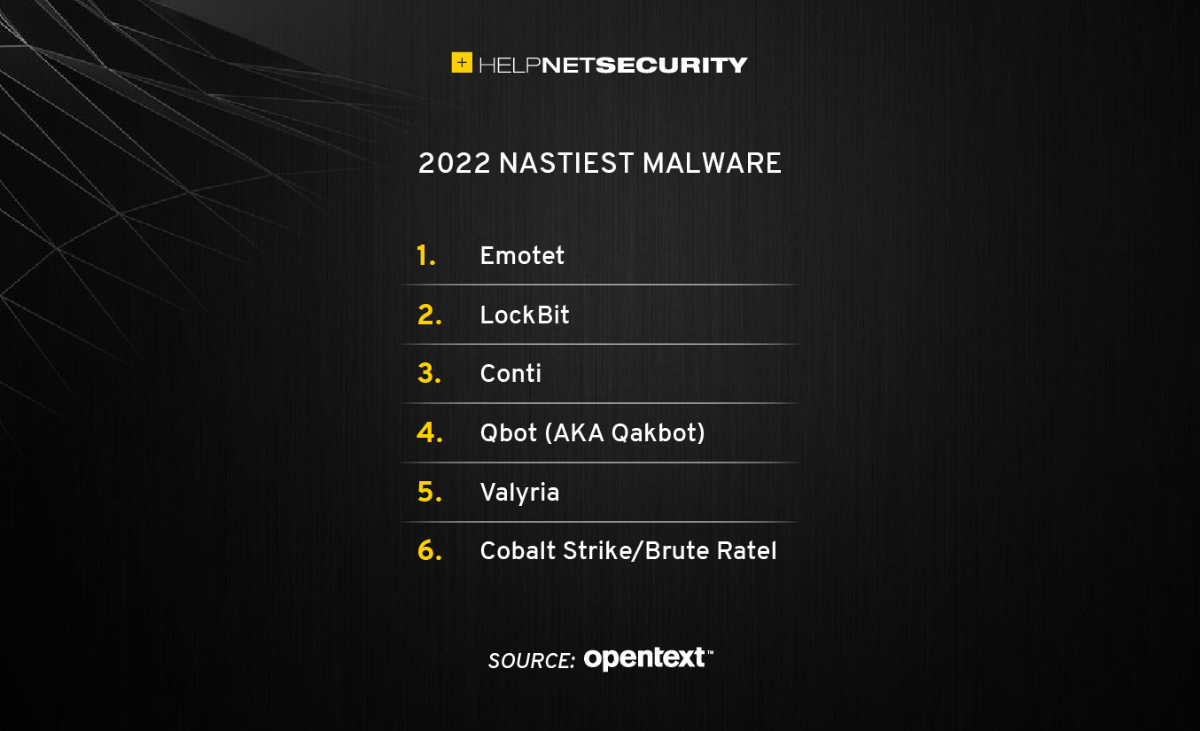 Emotet regained its place at the top, reminding the world that while affiliates may be taken down, the masterminds are resilient. LockBit evolved its tactics into something never seen before: triple extortion. Analysis also revealed an almost 1100% increase in phishing during the first four months of 2022 compared to the same period in 2021, indicating a possible end to the “hacker holiday,” a hacker rest period following the busy holiday season.

“The key takeaway from this year’s findings is that malware remains centre stage in the threats posed towards individuals, businesses, and governments,” said Muhi Majzoub, EVP and Chief Product Officer, OpenText.

“Cybercriminals continue to evolve their tactics, leaving the infosec community in a constant state of catch-up. With the mainstream adoption of ransomware payloads and cryptocurrency facilitating payments, the battle will continue. No person, no business—regardless of size—is immune to these threats.”

While this year’s list may designate payloads into different categories of malware, it’s important to note many of these bad actor groups contract work from others. This allows each group to specialise in their respective payload and perfect it.

Emotet remains the most successful botnet in existence, following a brief shutdown last year. Its job is to send malspam campaigns to billions of emails a day. It creates a foothold on a victim’s computer, with follow-up malware that will then move laterally and compromise the rest of the environment before bringing in the final payload of ransomware.

LockBit is this year’s most prolific and successful ransomware group. While the group has been around for about three years as a ransomware-as-a-service (RaaS) group, they continue to advance their tactics. In addition to taking data, holding it for ransom and threatening to leak it, triple extortion adds a third layer: a distributed denial-of-service (DDoS) attack on an entire system to completely lock it down.

Conti, a RaaS malware, has been on the Nastiest Malware radar for quite some time. In February, Conti released a statement of support on their leak site for the Russian government. Shortly after a twitter account, Conti leaks, leaked Conti’s internal chats dating back almost two years resulted in the dismantling of their leak site and command and control servers. Conti has since rebranded into multiple operations, most notably HelloKitty, BlackCat, and BlackByte.

Qbot (AKA Qakbot), possibly the oldest info-stealing trojan, still receives updates today. It moves throughout the network and infects the entire environment while “casing the joint” to allow access to as much data as possible to exfiltrate for extortion and to prepare for the final stage of ransomware payloads.

Valyria is another strain of a used-to-be banking trojan turned into malspam botnet with email attachments, turned into malicious scripts that starts an infection chain typically resulting in ransomware. The tricky part about Valyria is the complexity of the components and its ability to evade detection.

Cobalt Strike and Brute Ratel are adversarial attack simulation tools. Cobalt Strike is a pen testing tool designed by white hats; Brute Ratel was created for red teams. The purpose of these tools is to help teams simulate attacks to understand the tactics hackers use, determine security gaps, and make the appropriate changes. Not surprising, Cobalt Strike, and now Brute Ratel, are frequently used by the bad guys.