OutSystems released a new developer jobs report identifying the factors that motivate them to stay with their companies and the frustrations that drive them away. The report, Developer Engagement Report: Are Your Developers Happy or Halfway Out The Door?, draws on data from 860 global developers from different backgrounds to identify trends regarding satisfaction and retention of developers, and provide best practices for IT leaders to avoid developer burnout and turnover. 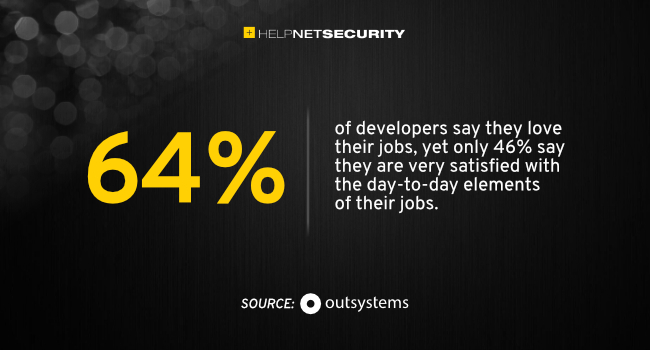 “We continue to be amazed by how IT leaders and developers around the globe continue to innovate in the face of challenges. However, with a global talent shortage of over one million developers, IT leaders will not be able to hire their way out of the challenges they face in response to the insatiable appetite for building high-performance, quality software,” said Gonçalo Gaiolas, Chief Product Officer of OutSystems.

“Instead, they need technologies that will optimize resources, alleviate workloads, and supercharge developer productivity. IT leaders who understand the benefits of various tools can support advanced development techniques, including specific developer coding preferences, while easing the friction, toil, and resource issues that continually test developer motivation and frustration.”

The grass isn’t always greener: While slightly more US developers are seriously considering changing companies right now (33% US vs. 31% globally), they feel less confident about their prospects. Only 25% of US developers strongly agreed that there are many opportunities to easily get a better position right now, compared to 42% of global respondents.

With the significant rise of low-code as a streamlined development technique, the report investigates developers who use low-code as a subset of the larger developer community. Results indicate low-code developers – most of whom also use traditional coding languages alongside low-code – experience greater satisfaction around workload, shorter work weeks, more career growth, and fewer other factors that contribute to burnout.