HP identified a significant increase in the volume of organized cybercrime targeting data centers and networks, which can lead to financial and data loss. 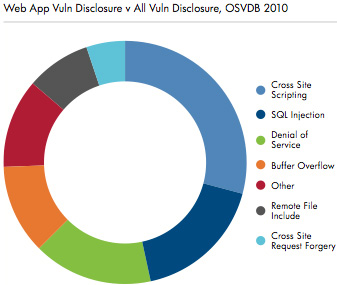 While there were more attacks recorded in 2010, the number of discovered vulnerabilities remained relatively stable, but high.

The HP report indicates that while the majority of attacks are against known and patched security vulnerabilities, many high-profile attacks use new vulnerabilities before vendors issue fixes.

To combat both types of attacks, businesses and governments can reduce risk with improved security practices, such as keeping their security systems up to date and leveraging the research of the HP Digital Vaccine Labs’ (DVLabs) Zero Day Initiative.

A key finding in the new report is the dramatic increase of web exploit toolkits. These “packaged” attack frameworks are traded online, enabling attackers to access enterprise IT systems and steal sensitive data. According to the report, web exploit toolkits are rapidly growing as the weapon of choice by attackers due to ease of use and high success rate.