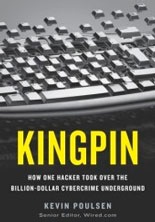 If you followed our site over the years, you had the opportunity to read a little about some of the protagonists of this book: Max Vision the creator of CardersMarket, Albert Gonzales – the TJX hacker, FBI agent Keith Mularski (a.k.a. MasterSplyntr) who was behind the DarkMarket shutdown, and others. This book will immerse you in their wheelings and dealings spanning a period of a number of years, and show you how their stories ended the way they did.

In a previous life, Poulsen served five years in prison for hacking. He is now a senior editor at Wired.com and a contributor to Wired magazine. He oversees cybercrime, privacy, and political coverage for Wired.com and edits the Threat Level blog, which he founded in 2005.

This is not your typical book about a heist that keeps you in suspense until the very end. You know how this book ends, so there are no surprises about that. But what preceded the prison sentences? How did those hackers – Max Vision and Albert Gonzales in particular – manage to make such a great impact on our everyday lives and on how we view the state of (in)security of our financial information?

The story starts with Max Vision’s background, childhood and teenage years, and shows us how his thirst for knowledge and amazing capability of solving problems made him what he is, but also how circumstances made him capable of compartmentalizing parts of his life.

This allowed him to reconcile the two parts of his personality – the ingenious white hat hacker that wanted to help the authorities, and the resourceful black hat who time and time again sidestepped the white hat and his ethical ideas in order to make easy money and show his peers that he was above all of them.

Poulsen collected all the information for the book mostly from the actors themselves, in endless hours of interviews and email exchanges. Seemingly everyone who ever influenced Vision was given the opportunity to share their unique perspective on how he acted and their speculations about why he acted that way.

The book is written as a third-party account, focusing mostly on Vision and Mularski. I spent the first third of the book wishing that the story was told in first-person by Vision himself, but later realized that Poulsen had made the right choice. I particularly wanted to know the inner workings of Vision’s mind as he saw it, but realized that an unbiased onlooker would manage to make more sense of it.

I believe that the author wanted to make Max Vision a sympathetic character, but I think that whether he comes across as such depends a lot on the reader. But, even if he doesn’t, the book remains an enjoyable account. For those who prefer to root for the “good guys”, there’s always Agent Mularski’s part of the story.

The writer would have been forgiven for a less skillful narrative given that the subject matter in itself is extremely engrossing – but, eschewing complicated explanations of the technology involved and covering the lives of some two dozen main “players”, Poulsen enthralls the user by depicting clearly their interpersonal dealings.

I would recommend the book to anyone and everyone, but especially to those people who know practically nothing about hacking and carding, since Kingpin offers a fascinating and detailed peek into a world whose existence most people aren’t even aware of.