For one thing, it isn’t hidden from the user’s view – after the installation the app is obviously visible and is named Speech Recorder. For another, it regularly crashes and ends phone calls when actually used: 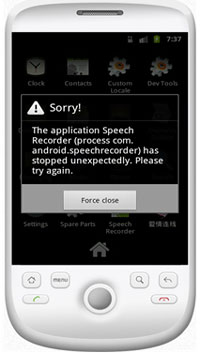 Should we still consider it a Trojan? Symantec researchers have analyzed it in depth and came to the conclusion that is likely a legitimate – although unethical – app that is currently being sold on a couple of Chinese app store sites and is pitched as a way of confirming a partner’s infidelity.

The supposition that the recorded conversations get sent to a remote server was also wrong – the only way to access them is if one has physical access to the device.

The app does send something to the remoter server, though: the GPS location and the call and SMS logs. This information is then offered by the app’s creator to the suspicious spouse for a certain fee.

Regarding the instability of the app, it seems to manifest itself when the app is installed on an actual mobile device. The researchers attribute it to the fact that not all Android hardware works the same way and say that the app did remain stable on only one of the devices they tested it on.