What do you think cyber crooks do with the information collected from mobile phones by malware? Trend Micro has one of the answers to that question.

Its researchers have recently discovered a Chinese website that provides a mobile phone monitoring service to those willing to pay between 2,000-3,600 Chinese yuan (US $300-540).

Once the payment is executed, the customer is provided with access to a backend server of the service, where all the collected information can be viewed.

The first step for every customer is to send out an MMS carrying the malicious payload to the target’s cell phone, and he or she can customize it in such a fashion as to appear it comes from a phone number familiar to the recipient, making it more likely that the attached payload will be downloaded and installed.

Once installed, the malware is free to collect information and to send reports to the backend service. Here is how a report of a phone call executed from the targeted device looks like: 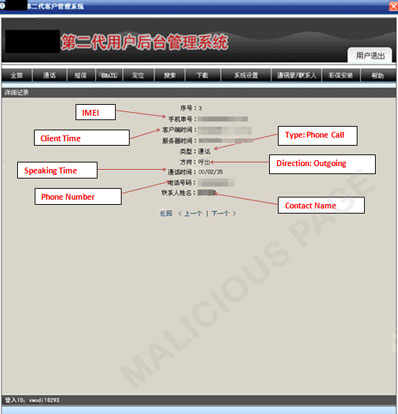 Similar reports about text messages, emails and the location of the device are also delivered.

For now, the service is available for those who want to spy on someone using a phone running on Symbian or Windows Mobile, but the researchers say that it is highly likely that users with Android devices won’t be safe from it for long.