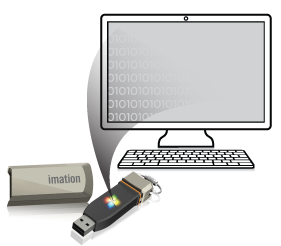 “As organisations increasingly allow and even encourage employees to work outside traditional offices, and look to enable “bring your own device’ (BYOD) or contractor access to the organization’s applications, they are in search of solutions that allow authorized users access to information they need without compromising the security of their data,” said Lawrence Reusing, Imation’s general manager for Mobile Security.

With Imation’s mobile workspace solution, IT can issue a full-featured Windows 7 desktop environment on a secure, hardware encrypted USB device that employees or contractors can use both in the office and on computers at home or on the road.

With Imation’s new Crossover Storage capability, the Stealth Zone USB device can be plugged into a computer’s USB port and booted into a secure Windows 7 desktop environment; or, using a separate, secure storage partition, it can be used as a traditional encrypted secure flash drive, eliminating the need for a second encrypted drive for data transfer.

Full host-computer isolation, where, after reboot and authentication, the computing environment is isolated from malware and data leakage.