Malware peddlers are taking advantage of yesterday’s release of the latest version of Google Chrome and have already set up a spoofed page of the initial rollout page in order to deliver their malicious wares (click on the screenshot to enlarge it): 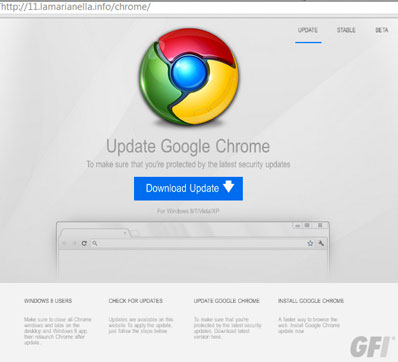 The URL of the page has nothing to do with Google, and that’s something that will tip off the majority of the potential victims to the fact that downloading the offered malware is a bad idea.

Still, those who don’t notice it will get another chance to stop the download, as Chrome detects the file as malicious and warns users about it. That is, hopefully, a warning they heed.

“The file itself has been around for a while, being seen on around 14 or so websites since around October and is listed at Malwr.com which mentions attempts to access Firefox’s Password Manager local database – meanwhile, it’s listed on the comments section of VirusTotal as being capable of stealing banking credentials,” warns GFI’s Chris Boyd.

Users are advised to get their updated by following the instructions offered by Google.