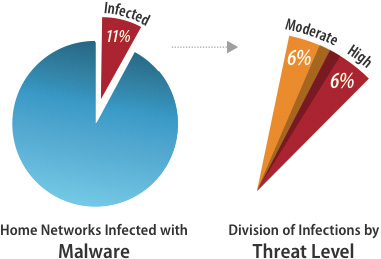 This report also marks the first time that Kindsight has released annual metrics from its security research. Findings from 2012 include:

“It’s clear after publishing these metrics for a year that malware continues to be a problem for home and mobile networks,” said Kevin McNamee, security architect and director, Kindsight Security Labs. “When we look back at the full year, 13 percent of home networks were infected with malware. Botnets were responsible for almost half of those infections and ZeroAccess is still the leading botnet. Mobile malware is also an emerging threat that is clearly growing as high threat level malware on mobile networks increased by 67 percent from Q3 to Q4.”

The report also provides analysis on malware developments over the past three months, including ZeroAccess, TDSS, Alureon, AgentTK, the Zeus banking Trojan, and others. In addition, the report includes new information on the rise of mobile spyware as a BYOD threat.