The popularity of Starbucks coffee shop coupon application is being misused by malware peddlers to target South Korean Android users and intercept their incoming text messages.

Once installed, the app will display the familiar icon, but if the user tries to start it, a fake error message reporting that the server is overloaded and unable to process the request appears: 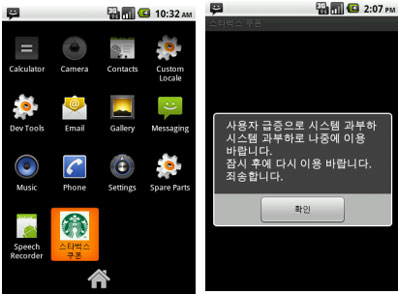 malware peddlers are counting on the user believing that the app is simply having problems, while in reality it works furiously to create a service to run in the background after the device has been rebooted, warn McAfee researchers.

The fake app / Trojan sends the phone number associated with the devise to a remote server and by doing so “registers” the infection. It’s main function is to monitor incoming SMS messages, which it collects and sends to the same remote server. It also allows blocking of certain messages.

It is unknown why the cyber crooks behind this malware collect SMS messages and what they do with them.