There’s some very good news for users of CyanogenMod, one of the most popular modified Android firmware on the market: its founder and main developer Steve Kondik (aka Cyanogen) has announced that he is currently working on a new privacy feature that would allow users to prevent third party apps from accessing their personal data. 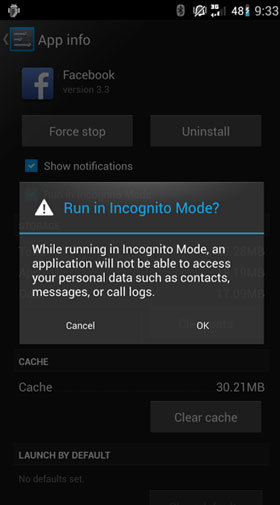 The feature – dubbed “Run in Incognito Mode” – has a per-application flag that enables it to return empty lists for contacts, calendar, browser history, and messages, and return the information that GPS is disabled.

“When an app is running incognito, a quick panel item is displayed in order to turn it off easily,” says Kondik, and adds that unlike in a previously implemented (and ultimately unstable) feature that let users revoke some or all permissions from any application, this one will offer no fine-grained permissions controls (i.e. if one opts for the incognito mode, all the permissions will be revoked).

This feature is provided via a simple API, and according to Kondik, third party applications can honor the feature by using it, or they can choose to display pictures of cats instead of the app running normally. Users will be able to turn on the feature in the settings for each app.

The feature will not be hiding or giving out false device information to the apps, and will not block ads.

“I think a lot of people have given up on their right to privacy for the sake of convenience, and too many companies are taking advantage of it,” Kondik has stated for Ars Technica. “This feature is just a way to take some of that power back.”

As things stand, the feature will not ready for the next stable release, but user of the nightly build of CyanogenMod 10.1 will be able to test it out.

Kondik also said that he will uploading the CyanogenMod version with the feature to the the Android Open Source Project in the hopes that Google might consider something similar for future Android versions.