Appthority performed a static, dynamic and behavioral app analysis on the 400 most popular free and paid apps on the iOS and Android platforms. They analyzed each app for particular behaviors within a test environment. 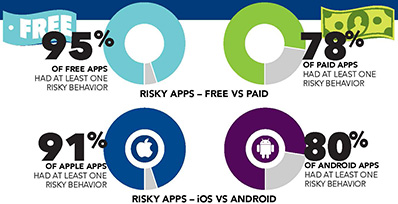 Results of the analysis:

“In analyzing both paid and free apps in our report, we’ve identified several new security trends within the global app ecosystem,” said Domingo Guerra, president at Appthority. “For instance, we measured how paid apps – like free apps – are now supporting in-app purchasing and sharing data with ad networks as a method of generating revenue, even if it means putting user and corporate data at risk.”

“We also discovered several popular iOS apps that access the unique device identifier (or UDID), even though Apple strictly prohibits that activity because UDIDs can be linked back to the private user information and activity as they navigate across apps,” Guerra added.