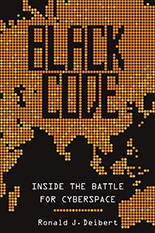 If anyone knows what’s really going on in cyberspace and which forces threaten its stability and security, it’s Ronald Deibert and his colleagues from the well known Citizen Lab.

This book couldn’t have been published in a more appropriate moment – just in time for many of the things it reveals to be confirmed by the documents leaked by NSA whistleblower Edward Snowden and the subsequent leaks and revelations they triggered.

Ronald J. Deibert is professor of Political Science and Director of the Canada Centre for Global Security Studies and the Citizen Lab at the Munk School of Global Affairs, University of Toronto, an interdisciplinary research and development “hothouse” working at the intersection of the Internet, global security, and human rights.
He is a co-founder and a principal investigator of the OpenNet Initiative and the Information Warfare Monitor, which uncovered the GhostNet cyberespionage network.

Sometimes I wish that I was more like my friends – not knowing and not really caring about the present and the future of the Internet and cyberspace, using it and enjoying it almost mindlessly, lulled into the illusion of its constancy and stability, ignorant of the real situation and the invisible battles that are going on between those who want to control it and those who want to safeguard it.

Alas, that is impossible. Thanks to my job, I’m effectively living half of my day in cyberspace and can’t be oblivious to all of the above. But I have another problem – concentrating on specific things that interest me more than others, I often stop being able to see the proverbial forest from the proverbial trees.

This book changed all that – it made me see and comprehend a much bigger picture then I was able to do before. For the first time I grasped – really, thoroughly understood – how insecure the Internet, it’s architecture, the software and communication protocols we use, and all of it are.

It made me realize how political and corporate forces collude to change the Internet, limit our use of it to pre-approved ways, and try to make us accustomed to and reconciled with being surveilled all the time. They want us to consume, and not to participate.

“We are actively discouraged, by law and the companies involved, from developing a curiosity and knowledge of the inner workings of cyberspace. The extraordinary applications that we now use to communicate may feel like tools of liberation, but the devil is in the details,” Deibert writes and accurately voices what, in the back of my mind, I unsuccessfully tried to articulate to myself for years.

But, however bleak the situation may seem, the book is not all “doom and gloom”. “Cyberspace us what we make of it. It is ours,” says Deibert, and we would do well to believe it and try to do our part, however insignificant it may seem.

Three or four years ago this book might have felt as it was written by a paranoid conspiracy theorist, despite Deibert’s reputation. Now, given the NSA spying scandal that rocked the world in the last few months, it seems almost prophetic.

It’s not an easy read – not because it’s not well written, but because it takes time to digest some of the information contained in it. Still, I would whole-heartedly recommend it to anyone.