In the third quarter, McAfee Labs detected more than 307 new threats every minute, or more than five every second, with mobile malware samples growing by 16 percent during the quarter, and overall malware surging by 76 percent year over year. 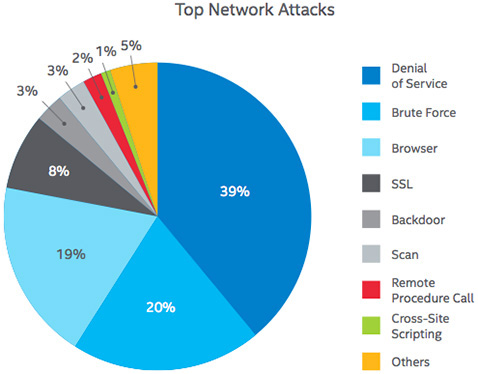 The researchers also identified new attempts to take advantage of Internet trust models, including SSL vulnerabilities such as Heartbleed and BERserk, and the continued abuse of digital signatures to disguise malware as legitimate code.

Vincent Weafer, SVP, McAfee Labs, Intel Corporation, told Help Net Security: “The third quarter of 2014 brought the latest in a series of events that worked to shake confidence in a Trusted Internet. Exploits of high-profile vulnerabilities shook confidence in long-established Internet trust models. The increasing frequency and scale of data breaches shook consumer confidence in organizations’ abilities to protect their personal data. The sophistication and impact of these and other attacks shook organizations’ confidence in their ability to detect and deflect attacks before serious damage occurs.”

1. Increased use of cyber warfare and espionage tactics. Cyber espionage attacks will continue to increase in frequency as long-term players will become stealthier information gatherers, while newcomers to cyber-attack capabilities will look for ways to steal sensitive information and disrupt their adversaries.

2. Greater Internet of Things attack frequency, profitability, and severity. Unless security controls are built-in to their architectures from the beginning, the rush to deploy IoT devices at scale will outpace the priorities of security and privacy. This rush and the increasing value of data gathered, processed, and shared by these devices will draw the first notable IoT paradigm attacks in 2015.

3. Privacy debates intensify. Data privacy will continue to be a hot topic as governments and businesses continue to grapple with what is fair and authorized access to inconsistently defined “personal information.”

4. Ransomware evolves into the cloud. Ransomware will evolve its methods of propagation, encryption, and the targets it seeks. More mobile devices are likely to suffer attacks.

6. POS attacks increase and evolve with digital payments. Point of sale (POS) attacks will remain lucrative, and a significant upturn in consumer adoption of digital payment systems on mobile devices will provide new attack surfaces that cybercriminals will exploit.

9. New evasion tactics for sandboxing. Escaping the sandbox will become a significant IT security battlefield.

Vincent Weafer, continued: “Restoring trust in 2015 will require stronger collaboration, new standards for a new threat landscape, and shrinking time-to-detection through the superior use of threat data. Operation Tovar, the Cyber Threat Alliance, and BERserk provided examples of how public-private and cross-industry collaboration can enable us to fight back by killing botnets behind the attacks, detecting threats faster, and detecting and patching vulnerabilities before they invite attacks. We are on the verge of new standards. Biometrics such as voice, eye, and facial recognition will begin to replace passwords. New types and greater utilization of reputation and behavioral data will revolutionize app, device, and web validation. Security on the chip will make the growing mobile and IoT paradigms Secure by Design.”

For the full copy of the McAfee Labs Threats Report: November 2014 go here.