A new study by the the Ponemon Institute and HP reveales a dramatic increase in the overall cost of cyber crime. The 2015 Cost of Cyber Crime Study quantifies the annual cost of cyber crime for companies across seven countries including the U.S., U.K., Japan, Germany, Australia, Brazil and the Russian Federation. 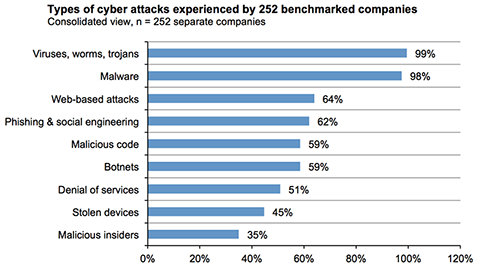 In the U.S. study, researchers found the average annualized cost of cyber crime incurred by a benchmark sample of U.S. organizations was $15 million, representing a nearly 20 percent increase year over year and an 82 percent increase since the study’s inception six years ago.

The results also revealed the average time it takes to resolve a cyber attack – 46 days – has increased by nearly 30 percent during this same six-year period, with the average cost incurred to resolve a single attack totaling more than $1.9 million.

The U.S. study also revealed that some organizations are addressing the significant costs associated with detection and recovery by making investments in security intelligence, which has been shown to reduce response costs and provide a significant return on investment.

“As organizations increasingly invest in new technologies like mobile, cloud, and the Internet of Things, the attack surface for more sophisticated adversaries continues to expand,” said Sue Barsamian, senior vice president and general manager, Enterprise Security Products, HP. “To address this challenging dynamic, we must first understand the threats that pose the most risk and then prioritize the security strategies that can make a difference in minimizing the impact.”

As organizations strive to embrace new technologies while protecting their expanded environments, there is a need to shift security strategies from traditional network control and perimeter management to an advanced focus on protecting interactions among users, applications and data. The study demonstrates this shift; reporting organizations are now committing 20 percent of their security budgets to the application layer1, up 33 percent in just two years. 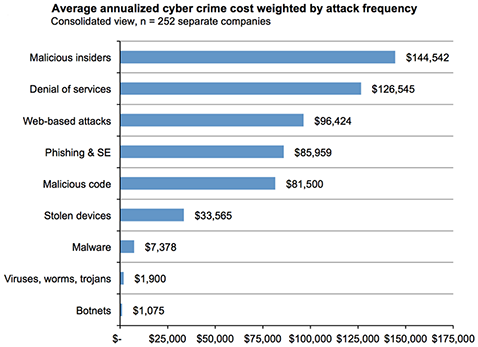 Cyber crimes continue to be very costly: The average annualized cost of cyber crime incurred was $15 million, with a range from $1.9 million to $65 million each year per company. The net increase in the cost of cyber crime over the six year span of the study was 82 percent.

Cost to resolve cyber attack escalates: The average time to resolve a cyber attack was 46 days, with an average cost to participating organizations of more than $1.9 million during this 46-day period. This represents a 22 percent increase from last year’s estimated average cost of approximately $1.5 million, which was based upon a similar 45-day resolution period.

Understanding the cyber threats that pose the biggest risk and have the most economic impact to organizations can help enterprises better plan their security approach and investments.

Organizations investing in and using security intelligence technologies and governance practices to address the crimes that proved most costly were more efficient in detecting and containing cyber attacks, thereby reducing costs otherwise incurred.