Adoption reality finally measures up to hype for cloud computing. There are game-changing consequences for IT departments as DevOps’ influence extends across the enterprise, according to ServiceNow. 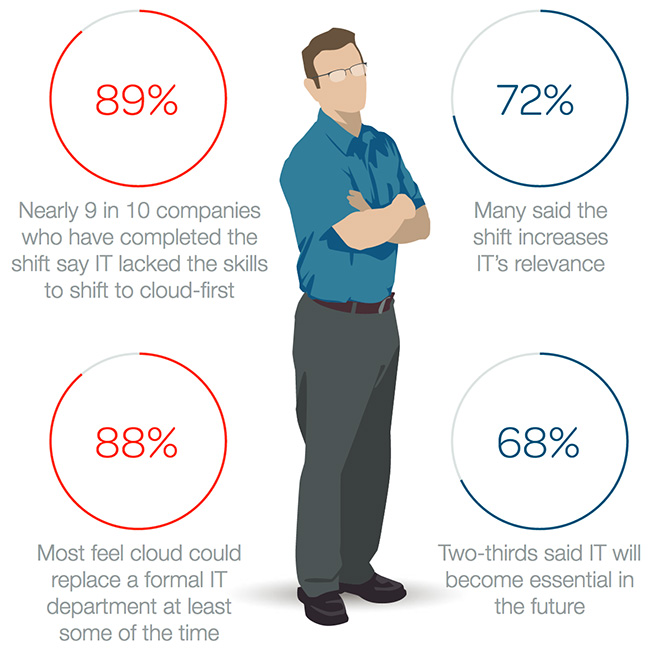 Adoption reality finally measures up to hype for cloud computing

“For years pundits have waited for an enterprise shift from traditional data center computing to cloud computing,” said Dave Wright, chief strategy officer, ServiceNow. “Today reality meets hype, and cloud-first consumption will accelerate at a break-neck speed in the next two years.”

DevOps drove the charge to a cloud-first world

“Cloud is not new, so why was 2016 the year enterprises became cloud-first? According to the survey, the answer is the rise of DevOps,” said Wright. “DevOps saw early that cloud computing could solve many of the issues they were grappling with. And DevOps’s ‘can-do’ vibe – enabled by cloud – is extending across the enterprise.”

IT will have to adapt to this new reality, where most of the apps and infrastructure are outside the data center.

“Amidst the cloud-first shift, there are ominous signs for IT if there’s no change,” said Wright. “We believe this presents a real opportunity for those visionary IT organizations who can become strategic partners to the enterprise during this shift to cloud-first.”

The cloud-first shift has several likely consequences for IT departments:

IT visibility and cost predictions could be obstructed. IT must have full visibility of the organization’s compute environment, including all cloud-based services and applications. Visibility helps IT more effectively manage demand, understand compute costs, utilize cloud- and on-premises-based resources, execute on projects, ensure regulatory compliance, and manage business relationships.

The rise of DevOps means more of the enterprise will be playing in IT’s backyard. IT teams will be seeing more business app projects coming from the bottom up, and will need to enable the line of business with greater tools to code. At the same time, they’ll need to maintain control of their enterprise environment for security and compliance. They’ll need to delegate development to a growing legion of employees with DevOps skills.

Cloud growth means cloud sprawl. Implementing more agile cloud management policies and best practices will be critical. Companies will have to deal with a greater number and types of vendors, and those vendors will come and go more quickly than they may be accustomed to. That means Service Integration and Management (SIAM) and vendor management will gain importance.