With continued growth in use of Office 365 and G Suite, overall cloud adoption has hit an all-time high, according to Bitglass. Fifty-nine percent of organizations worldwide now use one of these two apps, up from 48 percent in 2015. 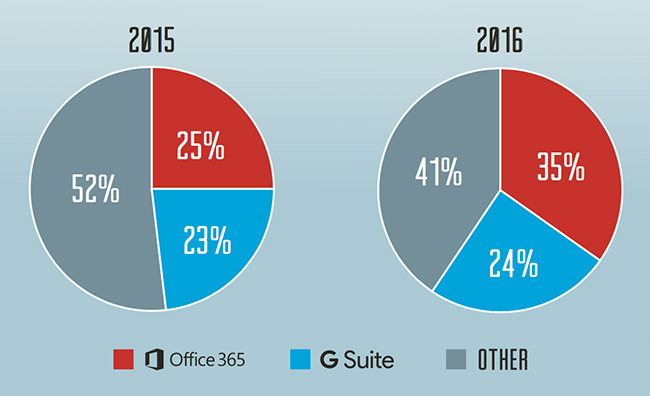 Slack is now among the fastest-growing enterprise cloud services, with at least some use in an estimated 33 percent of enterprises worldwide.

Using internally developed technologies, the Bitglass research team scanned cloud use of more than 120,000 companies to identify the primary cloud productivity suite used in each organization and whether key security technologies, such as single sign-on (SSO), are in use.

Bitglass found that Microsoft’s Office 365 and Google’s G Suite remain the most widely deployed cloud services in enterprises as they transition away from premises-based email and productivity applications. Office 365 continues to pull ahead of G Suite, and is deployed in more than one third (34.8 percent) of organizations while G Suite is used by 25 percent.

“Strong growth in the adoption of cloud applications is driving increased concern around data security,” said Nat Kausik, CEO, Bitglass. “While SaaS providers do an excellent job of securing infrastructure, securing corporate data remains the responsibility of the enterprise.”