The Shadow Brokers, a group (?) of hackers that has made a big splash in August last year by leaking and offering for sale exploits supposedly stolen from the infamous Equation Group, has decided to call it quits , but not before offering a parting gift. 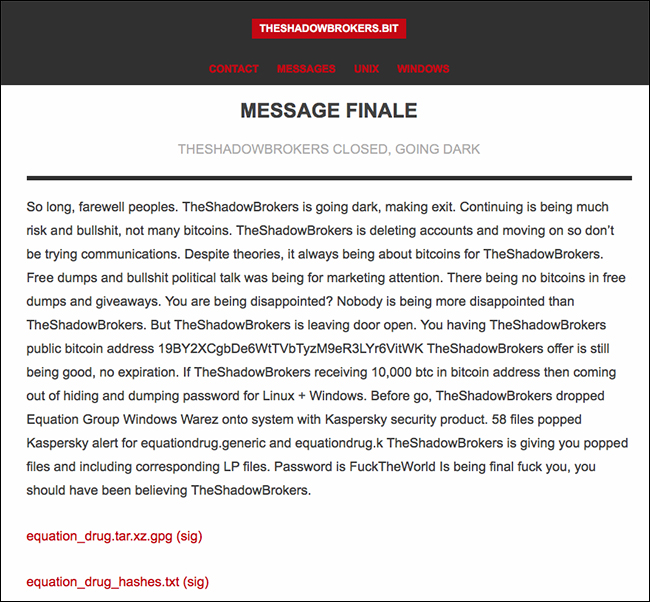 At the time, the hacker group had published some exploits in order to demonstrate the veracity of their claims – to prove that the rest of the exploits for sale are worth the price they asked for them (10,000 Bitcoin).

Since then, they received just around 10 Bitcoin, as very few buyers apparently wanted the exploits or were leery since the exploits have been tied to the Equation Group, a threat actor that is believed to be linked with the National Security Agency (NSA).

The group still hopes that someone will pay the full price, but in the meantime they have released another batch of attack code, which, according to Heimdal Security experts, contains 58 Windows hacking tools.

Most of those are already detected by Kaspersky Lab security products – the Russian cybersecurity outfit has unveiled Equation Group’s existence in early 2015 – but still go undetected buy many other security solutions.

It’s still unknown who the Shadow Brokers are, or whether it is a group or an individual. It’s also still unknown whether the leaked exploits were stolen by them from the Equation Group, or have been exfiltrated by an insider and ultimately found their way into their hands.

But, ultimately, there is no public evidence to confirm this theory.