The findings of a new Malwarebytes report illustrate a significant shift in cybercriminal attack and malware methodology from previous years. Ransomware, ad fraud and botnets, the subject of so much unjustified hype over previous years, surged to measurable prominence in 2016 and evolved immensely. Cybercriminals migrated to these methodologies en masse, impacting nearly anyone and everyone. 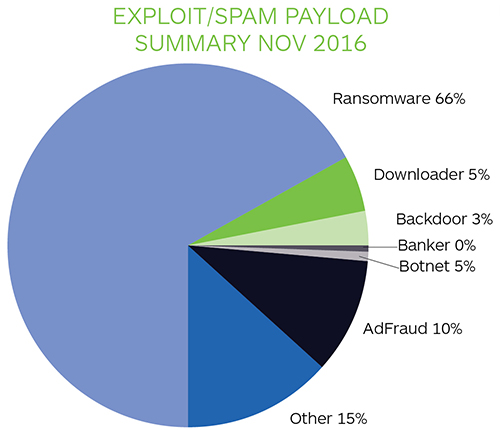 To better understand just how drastically the threat landscape evolved in 2016, researchers examined data taken from Windows and Android devices running Malwarebytes in more than 200 countries. Both corporate and consumer environments were studied and data was collected from June 2016 through November 2016.

In the six months studied, nearly 1 billion total malware detections/incidences were reported. Data was also obtained from Malwarebytes’ internal honeypots and collection efforts to identify malware distribution, not only infection.

“To protect users from cybercriminals, we need to intimately understand their methodologies and tactics,” said Marcin Kleczynski, Malwarebytes CEO. “Our findings demonstrate that the frequency and variety of new cyberattacks has crashed into people and businesses at an alarming rate. The last year involved an onslaught of ransomware, a surge of pernicious ad fraud and new, dangerous uses for botnets. These threats have the potential to erode many of the gains that computing is providing global society. Both consumers and businesses need to better understand how these new attack methodologies may impact them.”

Mobile malware evades detection from mobile security engines, resulting in an increase in the amount of mobile malware detected.

Europe is the most malware-ridden continent, and distribution of detections is telling.

“In the last year, we have seen a huge transition in the top malware threats and how they are distributed,” said Adam Kujawa, Director of Malware Intelligence, Malwarebytes. “Attackers are always seeking the greatest possible profit, causing them to shift methodology per region and geography, based on user awareness and attack success rate. The use of ransomware and ad fraud, specifically Kovter, have taken off because they provide a source of direct profit for attackers. This is the future of cybercrime, and it is imperative that we continue to study how these methods evolve over time.”